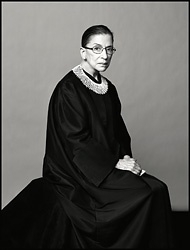 This week's New York Times Magazine features Emily Bazelon's interview with Justice Ginsburg. It's relatively juicy stuff, given how guarded the Justices generally are. Ginsburg talks about Judge Sotomayor, feeling alone - even ignored - at conference, and how she thinks precedents on reproductive rights and discrimination should and will change.

My favorite tidbits were explanations of the Justice's work-out routine and her quip that if the court were mostly women "[t]he work would not be any easier. Some of the amenities might improve." Another highlight involved the impact O'Connor's retirement has had on Justice Ginsburg's experience.

Q: What has [being the only woman on the court] been like?

JUSTICE GINSBURG: It’s almost like being back in law school in 1956, when there were 9 of us in a class of over 500, so that meant most sections had just 2 women, and you felt that every eye was on you. Every time you went to answer a question, you were answering for your entire sex. It may not have been true, but certainly you felt that way. You were different and the object of curiosity.

The Justice flip flops a bit on whether gender impacts the substance of the justices' opinions, first saying she resists giving credence to the research on the effect of sex on judging, but then imagining that a majority-women court would decide discrimination cases differently than the current lineup does.

After the jump: Ginsburg's take on Sotomayor's "wise latina woman" comment and what appears to be a politically incorrect misstep of her own.

First, regarding Sotomayor's comment that “I would hope that a wise Latina woman with the richness of her experiences would more often than not reach a better conclusion than a white male who hasn’t lived that life.”

I thought it was ridiculous for them to make a big deal out of that. Think of how many times you’ve said something that you didn’t get out quite right, and you would edit your statement if you could. I’m sure she meant no more than what I mean when I say: Yes, women bring a different life experience to the table. All of our differences make the conference better. That I’m a woman, that’s part of it, that I’m Jewish, that’s part of it, that I grew up in Brooklyn, N.Y., and I went to summer camp in the Adirondacks, all these things are part of me.

Well I know I've wanted to go back an edit something I've said countless times. And now I imagine so might Justice Ginsburg since she told Bazelon (in answer to a question about access to abortions):

I had thought that at the time Roe was decided, there was concern about population growth and particularly growth in populations that we don’t want to have too many of. So that Roe was going to be then set up for Medicaid funding for abortion.

Hmm, populations we don't want to have too many of, eh? Who would that be exactly? My guess is it was said sarcastically, but big oops.