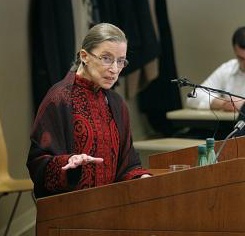 Ginsburg recelled some of the challenges she faced as a woman in the profession, reported The Boston Globe:

Ginsburg said rising through the ranks in a legal profession that was almost the exclusive domain of men was challenging. She said that after she graduated from Columbia Law School in 1959, where she was at the top of her class, "there was not a single law firm in the city of New York that would give me a job."

The role of women in society continues to evolve, she said, and discrimination of single and married mothers must be tackled.

In her household, the traditional role of mom-as-cook was broken almost 30 years ago, when her husband took over the duties. "Since 1980, I haven't made a single meal," she said.


Founded in 1908 as Portia Law School, New England Law Boston is the only law school established exclusively for the education of women. The school has been coeducational since 1938.