Ladies Day, an Excerpt from Women in Law by Dr. Cynthia Fuchs Epstein 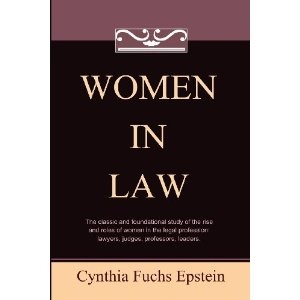 Editor's note: The following excerpt is from Women in Law by Dr. Cynthia Fuchs Epstein. The thirtieth anniversary edition is now available in paperback from Quid Pro Books, with a new foreward by Deborah Rhode. It is also available for Kindle and Kindle apps, Nook and Nook apps, and direct on Apple iBooks and iTunes (search by title or author name).  We applaud Harvard Women, Class of 1968, who helped Ladies’ Day become a memory.

Some law professors called on women in their classes with an eye to singularly embarrass them. … And all women students knew they would be asked to recite on “Ladies’ Day,” an institution common in many schools. Harriet Rabb recalled that at Columbia,

I heard of Ladies’ Day here when the professor would say, “Will all the little virgins please come to the front of the room.” Of course the women didn’t know whether to go or not. And when I was in school here between 1963 and 1966 there was one teacher who was known for his “Valentine’s Day massacre.” The women were obliged at the beginning of the hour to stand up at their seats and remain standing through the hour and get called on … and that would be the day when he did all the embarrassing and difficult-to-discuss problems.

At Harvard, Professor W. Barton Leach was known for his special Ladies’ Day performances. One of his students, a 1965 graduate, reported that

he sat in the audience and asked questions in a “humorous” tone of the women who were exhibited on the podium rather like performing bears.

On Ladies’ Day in Professor Casner’s first year Property class we were quizzed on the intricacies of dower, that is, on the rights women have in their deceased husbands’ property. For the professors and the male students, Ladies’ Day was an entertainment, a show put on at our expense.

By the mid-1970s, it was becoming difficult for law professors to exhibit such behavior. “One of my colleagues,” reported Professor Ruth Bader Ginsburg, at Columbia University, “with the best intention, had a Ladies’ Day to celebrate Billie Jean King’s victory over Bobby Riggs. The hissing could be heard down the corridor.” … All law students were subject to ridicule, but the women were subjected to a special sort. “Better go back to the kitchen,” a professor harangued women who stumbled in recitation.

From one year to the next, Ladies’ Day became a memory, and no one dared mourn it publicly. Harvard women of the law class of 1968 had helped its demise:

On Ladies’ Day, we dressed in black, all wore glasses and carried black briefcases. We totally devastated Leach—knew all the answers, and, at the end, when he asked, “What was the chose in question?” (his big punch line—the answer was “underwear” and was supposed to embarrass us), we replied, “we’ve replevied a few samples,” opened our briefcases, and threw fancy lingerie at the “boys.” Leach almost had a stroke on the spot, and never had a ladies’ day again!

To read the new foreward by Deborah Rhode, click here.