Ladies of the House (and Senate): The Sisters Who Came Before 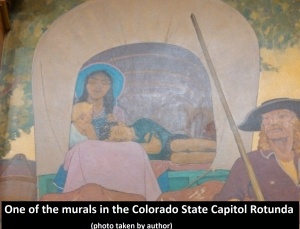 I majored in History before I went to law school. So, when I heard that a couple women in Colorado were compiling a interview-based history of all elected women in Colorado History I knew I had to meet them. Meg Froelich and Laura Hoeppner graciously agreed to meet with me so that I could interview them about the project and the stories of these women legislators for this month's blog.

Before joining forces to write & produce this film called “Strong Sisters: Elected Women in Colorado,” Meg and Laura met in graduate school at the University of Michigan. As part of their impressive resumes, both women have worked inside legislative bodies: Meg served as an elected member of the Greenwood Village City Council and Laura worked as a Legislative Aide within the Colorado General Assembly. Both have always been drawn to stories about women trailblazers in the state legislature and city government and how Colorado has led the nation in many ways. Yet, why hasn’t Colorado ever had a woman Governor, U.S. Senator or Mayor of Denver, like many other states around us with a shorter history of women in lawmaking?

A little background: In Colorado, women achieved the right to vote in 1893 and immediately elected three women to the Colorado General Assembly in 1894 - the first to serve in any state legislature. Meg says that according to their research, these were the first elected women to any parliamentary body in the world. Clara Cressingham, Carrie Holly & Frances Klock were these first trailblazers and I had never heard of them.

And that is largely the point of this project. Laura called recording interviews of former elected women legislators (and some city officials) “a dream of mine” because she realized that these oral histories would be lost like many before them. Their goal is not only an edited film highlighting these generations of women to be shown on PBS, in film festivals and schools, but to create an archive of all these interviews for use by researchers, students and citizens for generations to come. Laura stated that there is national and international interest in learning these stories. Over sixty interviews have been completed, and they estimate there will be eighty total when their project is completed.

The fascinating bits of history about Colorado women and our nation that I learned over lunch include:

I asked Meg and Laura what surprises they found in their research and interviews for Strong Sisters and one resonated with me the most. Laura explained “how little information” exists about many of these women legislators of the last 122 years. Meg and Laura don’t even know the first names of three of them because they were only referred to as “Mrs. [husband’s name]” in all legislative records and news accounts. Only Elizabeth Pellet published an autobiography and there are few biographies of others.

Meg and Laura hope the Strong Sisters film and history archive project will educate students and citizens alike so these Colorado women can be as well-known nationally as our “unsinkable” Molly Brown and unfortunate Baby Doe Tabor. (True confession: before I moved to Colorado, I had only actually heard of Molly Brown.)

This history-loving-woman-lawyer hopes that others are doing similar projects in their states to share and preserve the stories of our sisters who went before us.