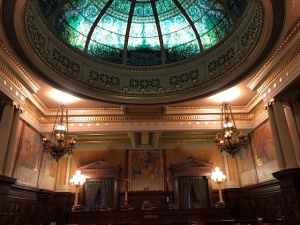 That was yesterday. Today is a new day.

I was in the middle of a lengthy telephonic settlement negotiation with my adversary, and he didn’t seem to understand why his position has weakened. New discovery had been produced. Inconsistent fact deposition testimony had been elicited. An expert witness who couldn’t possibly survive a Daubert motion was still on the pre-trial report. I was trying to explain all of this when he asked why old (expired) settlement offers were no longer on the table.
When all my reasoned legal analysis seemed lost on him, I succumbed to the “that was then, this is now” explanation.

He wasn’t amused. Then he thought he could distract me with small talk. Politics, sports, religion, and then - an actually controversial topic: "hey, where did the other woman go that was handling this case?"

She went out on leave. She had a baby. She won’t be back for a while. You’re stuck with me.

"Take time off when the kids are babies. They don’t notice you’re gone, then. When your kids are older, like mine, that’s when they notice you’re gone. You’d be better off staying in practice while they’re babies and powering down later on in life."

Hunh. You’re actually starting to make a little sense. I conceded this one point to my adversary.

Exactly. That’s why my newest settlement offer is final.

The facts of that case have long since escaped me - but the advice he gave me stuck with me for a long time. When my own three babies arrived while I was a Senior Associate at Skadden Arps, I took long maternity leaves, but returned to a pretty aggressive litigation schedule three times over. I powered through those early years, cobbling together child care and working on countless briefs and deposition outlines in the middle of night with sleeping, oblivious babies curled up in my lap.

I transitioned from the active practice of law when my kids reached school age. To many this might look like a lopsided career path, but for me it’s been a joy to pursue meaningful work outside legal practice, and still be able to sign up for field trips, make it to every single sporting event, play, and holiday concert. I can provide science and language arts tutoring, deliver class snacks in the middle of the day, and curl up on snow days without any excuses.

This morning, I sat in a familiar place - an appellate courtroom. The Pennsylvania Supreme Court, to be exact. I remembered with some nostalgia the feeling of preparing a brief, of arguing a motion with the kind of righteous anger and focus that can only be harnessed when working on a case 24/7 for months or years. I remembered the feeling of being referred to as “Counselor” and all that meant.

And then I looked down at my daughter. I looked around the room with fresh eyes - with her eyes. We were there for a class field trip, learning about Pennsylvania government and history and I got to be there with her instead of poring over a brief or persuading an adversary it was time to settle a losing case.

As I walked out of the courtroom, I thought about that adversary who was wrong about a great many things - all of which had to do with his losing case - but right about one thing.

That was then.
This is NOW.

P.S. Looking for the perfect graduation gift for your law grad?