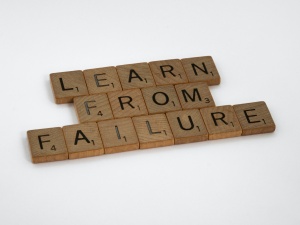 “I don’t know what your future is. . .  But if you’re willing to take the harder way, the more complicated one, the one with more failures at first than successes . . . then you will not regret it.”

About 20-30% of bar examiners will fail the bar exam. If you are one of them, you are not the first nor will you be the last person to do so. At the time, it may be difficult to see this “failure” as a learning experience which can help you grow - personally and professionally. Afterall, for many law students, passing the bar exam is often the first time in their educational careers they experience failure - resulting in opting out of retaking the exam. In other cases, there are successful licensed lawyers who have decades of experience and are required to take another bar exam. Even in these situations, life happens, and they fail.

In June 2021, George Pauta, Associate General Counsel and Head of Labor & Employment at sweetgreen, posted on Linkedin about his experience failing the California bar exam after having been a licensed New York lawyer for more than 15 years. 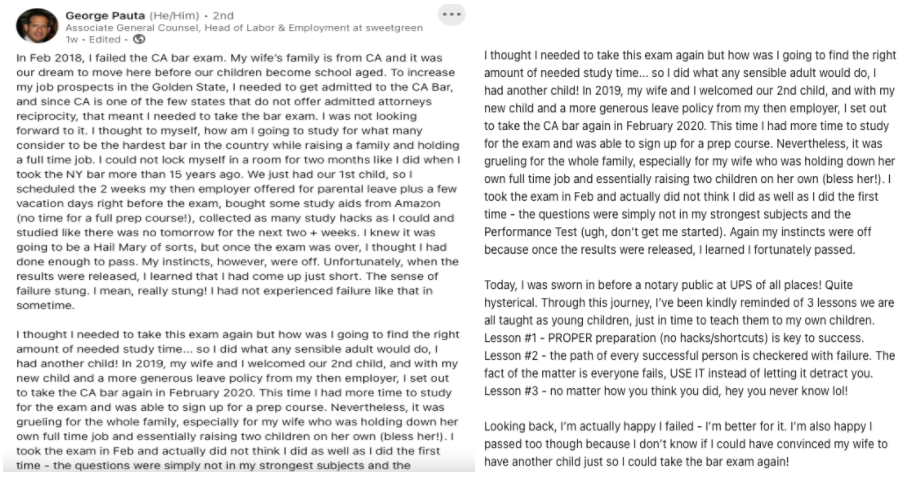 Although he is already a successful lawyer, Mr. Pauta took this deeply personal story about the bar exam and shared it publicly with the world, hopefully to show that he too can also experience setbacks on his journey.  However, prior to the California Bar, he noted how he was concerned about studying for the hardest bar exam in the country while raising his family and holding down his full-time job.  He had to retake the test and in retrospect, he learned the following lessons:

Lesson #1 – Proper Preparation (no hacks/shortcuts) is key to success.

Lesson #2 – The path of every successful person is checkered with failure.  The fact of the matter is everyone fails, USE IT instead of letting it detract you.

Lesson #3 – No matter how you think you did; hey you never know lol!

Bar examiners can draw inspiration from sports - especially from athletes.  For example, after almost every game of the NBA playoffs, a representative athlete from the losing team describes how they will review plays and learn from the game.  These athletes are the best of the best and still cannot win every game.  Similarly, failing does not mean that you do not know the law or that you will not make a great lawyer.  For many bar exam takers, the bar exam is a marker of privilege, rather than a showcase of your competency to practice law.  Sticking to the athletics theme, athletes are usually at their best when there are no distractions and they have the comfort of a first-rate place to train, top-notch nutritionists, and all the best trainers and coaches.  For many bar exam takers, especially those who come from backgrounds that are underrepresented in the legal profession, they may not have easy access to information regarding the best conditions in which to prepare for the bar exam because for many, they are the “firsts” in their families to take on this endeavor.  It is also well-known that historically the bar exam disproportionately impacted women and BIPOC individuals.  Thus, there is still so much room for the legal profession and legal education to shift to a more equitable industry.

Nevertheless, reassess your study schedule and put in as much time as you can.  Carve out the time and clear out your schedule to minimize distractions.  Take as many timed practice tests and learn why some answer choices are wrong and why that one answer choice is correct.  Understanding failure and adversity will truly make you a better lawyer.  After learning through your failure and perhaps soon after you pass the exam, you will see that there is no substitute for preparation, accountability, and unrelenting effort.  Whether you end up working on a case and pulling an all-nighter to organize discovery or trial preparation, your understanding of the sustained groundwork as a lawyer will continue with you during your career.

There are many real-life examples of how failing the bar exam has taught successful professionals to persevere later in life.  Regardless of your political affiliation, one example is U.S. Vice President Kamala Harris, who failed the CA bar exam and learned from it. Decades after retaking the bar exam and passing it, Vice President Harris endured races as District Attorney of San Francisco, Attorney General of California, and U.S. Senate -all demonstrating the same sense of relentless pursuit she showed despite the difficulty and adversity she went through.  Years later, we all know that she failed in her run for U.S. President.  However, she did not give up and decided to step up  - running successfully alongside President Joseph Biden to become the first female, first South Asian, and first Black (first Indian-American and Jamaican-American) Vice-President of the United States.

So for those individuals who are going to retake a bar exam, here are four affirmations that may be useful during your exam preparation:

Similar to envisioning success as an athlete, bar exam retakers should envision success and have faith in themselves.  These affirmations can be modified and tailored to what works best for you.  As with anything in life, you can only rely on yourself to reach your goals - even beyond the exam.  There is no doubt that you will encounter challenges in your career but use this time to cherish the opportunity and privilege to take the exam. Hopefully, these examples and affirmations will serve as your motivation during exam preparation. 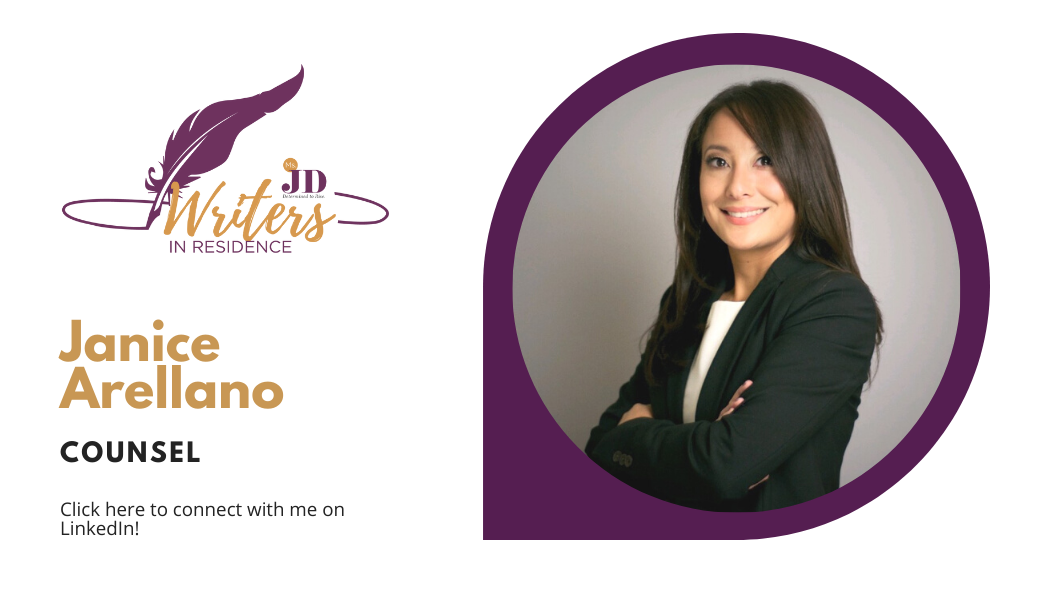