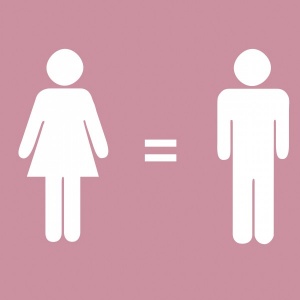 As a former “big firm” attorney and the former General Counsel of a privately-held corporation, I built my career in a male-dominated world.  Like many women of my 40-something generation I’ve experienced my share of sexism, bias, and exclusion.  I got used to people assuming I was a secretary or paralegal just because I am female.  I’ve been called sweetheart, girl, little lady, and a variety of other demeaning terms.  I learned to ignore the occasional lewd joke or crass comment.  I cringed when my colleagues referred to a young female intern as “the body” rather than by her name.  And I was speechless when a very senior and powerful person suggested I wear skirts more often so he could “have something to look at.”  If you doubt that gender bias exists in the professional world, please let me know.  For I have more examples I can share.

My experiences pale in comparison to the sexism, discrimination, and outright bias endured by women of prior generations.  From the fight for women’s suffrage in the early 1900s, to the battle for equal treatment and equal rights under the law throughout the 20th century, to the Mad Men era of blatant discrimination, the women who came before us forged a path on which we must now continue.  To that end, I have spent the better part of the last year writing about my experiences and sharing my insights and advice with the hope that it provides some guidance, support, and inspiration for the young women of the next generation.

As I began writing this article news broke of a video in which a major party candidate for President of the United States was caught on camera boasting about sexually harassing and assaulting women.  [1].  The video is not an isolated incident, unfortunately.  It is a pattern of behavior.  For many months we have witnessed the candidate making sexist comments to and about women ranging from news anchors to Presidential candidates to talk show hosts to beauty queens.  But this video…this is something entirely different.

Before you dismiss this as partisan rhetoric, I assure you I am not a diehard liberal.  I am not even a Democrat.  But I can no longer sit by quietly and say nothing.

This is not about politics.  It is not about one political party or even a particular candidate.  It is about the movement that has grown within a segment of the electorate that reveals the hidden (or not so hidden) biases that exist within our society.   In the days following the release of the now-infamous video, the collective reaction has been inconsistent.  While many – including several prominent leaders within the candidate’s own party – have condemned the video, many others have not.  While influencers ranging from media personalities to professional athletes to movie stars have disavowed the offensive comments, others have described it as just harmless talk.  It seems one cannot turn on a television without hearing some supporter dismiss the video as just “boys being boys.”  THAT is what this is about.  It is about the hidden bias that existed within a segment of society all along, only to reveal itself in the wake of the video’s release.  It is about recognizing and admitting that hidden (or not so hidden) gender bias still exists today.

We cannot dismiss the video as “locker room talk” as we have been urged to do.  For “locker room talk” is anything BUT just talk.  It is not harmless.  It is thought.  It impacts those who hear it.  It sends the message that powerful men can do whatever they want to women.  It is action.  It is an indication of one’s true beliefs and thoughts.  It exemplifies one’s values.  It is the demonstration of character.  And it affects us all.

As best stated by First Lady Michelle Obama in a speech she delivered in the days following the release of the now-infamous video:

“It reminds us of stories we heard from our mothers and grandmothers about how, back in their day, the boss could say and do whatever he pleased to the women in the office, and even though they worked so hard, jumped over every hurdle to prove themselves, it was never enough.  We thought all of that was ancient history, didn't we?  And so many have worked for so many years to end this kind of violence and abuse and disrespect, but here we are in 2016 and we're hearing these exact same things every day...”. [2].

In 1920, the 19th Amendment to the United States Constitution was ratified, thereby granting women the right to vote.  Yet here we are, nearly 100 years later, still fighting to be viewed as equal.  To be treated as equal.  To BE equal.  Women will never be equal in the professional world, the community, or in our personal lives if we live in a society in which at least some segment so clearly views us as inferior.

If we accept the “locker room talk” explanation, then what message are we sending to women?  To little girls and boys?  To society as a whole?  What can I possibly do or say that could help the next generation of women if we live in a world that views us as less than equal?  What advice could I share, what encouragement could I give, if I know that young women are entering a professional world in which they can never fairly compete?

If you doubt that “locker room talk” is a symptom of a larger problem I ask you to check your social media feeds.  Right now.  As I write this, #repealthe19th is trending on Twitter.  The “19th” of course, refers to the 19th Amendment to the United States Constitution which granted women the right to vote.  You read that correctly.  News outlets are reporting that a faction of the candidate’s supporters are advocating to repeal the 19th Amendment.  [3].  At least some segment of society is rallying to take the right to vote away from women.  If this alone does not signify that “locker room talk” is more than just talk, I don’t know what else I can say.

This is about equality.  Respect.  Decency.  Humanity.  Moral character.  It is about the centuries-long fight for gender equality and our obligation to ensure we do not go backward in time.  This is about continuing the fight for ALL people to be treated with equal respect and dignity.  This is about recognizing and admitting that gender bias still exists.  And about combatting that bias.  This is about having the courage to stand up for what is decent, what is moral, and what is right.

The views and opinions expressed in this article are solely those of the author and do not necessarily represent those of any entity or organization with which the author currently is or has been affiliated.

[1]  The video is available at https://www.youtube.com/watch?v=IY8FwWwIVyQ.