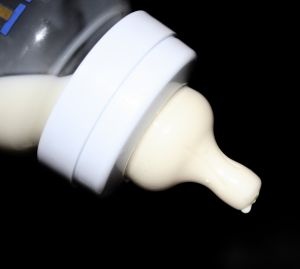 Do you remember taking the LSAT? It was the SAT...but scarier. Most people invest substantial amounts of time, nose-deep in prep books, hoping to surmount the last hurdle in the law school application process. All ABA accredited schools use the test, administered by the Law School Admissions Council (LSAC) ,in their application process and most give it substantial weight.

Most female law school applicants know that they will face substantial barriers in the legal profession, but few have likely considered an issue being raised by Ashley, an LSAT test taker who prefers to be identified only by her first name. Ashley is a proud mother to a five month old baby. When she realized she would still be breast feeding when the October test date rolled around, she contacted LSAC to request an accommodation.

According to the Mayo clinic, infants typically eat every few hours; if a mother doesn't nurse on the schedule her body is accustomed to her breasts become painful, can become infected or can begin producing less milk. The trouble for Ashley, and other breast feeding mothers like her, is that if she is away from her newborn for more than a few hours she will need to pump. Failing to do causes increasing uncomfortability - hardly a conducive condition to take a five hour exam under. The LSAT is five hours long and includes only one fifteen minute break...and it takes about 30 minutes to pump.

Ashley's request for a thirty minute break was refused because breastfeeding is not a disability under the Americans with Disabilities Act or LSAC's accommodation policy. Instead, she was told she would either have to take the test under standard procedures, wean her baby in time for the October test date, or take the test when she was no longer breast feeding. The fact that we have not achieved equality is rarely as clear as when an administrative council tells a woman that she must be in pain, forego her education for an unknown amount of time, or wean her child. Unreal.

Ashley has chosen the pain option but she is continuing to work with  MomsRising and the ACLU to get the policy changed for other women. It looks as if law school admissions may be following in the footsteps of the medical profession, a few years ago a Massachusetts woman had to get a court order to be allowed to pump during the Medical Licensing Exam.  When the ACLU contacted the general counsel of LSAC, Joan VanTol, she was "unresponsive to arguments about inequality in educational opportunity, and merely reiterated her position that LSAT was under no legal obligation to offer Ashley an accommodation."

If legal obligation is the only reason the law school admissions process has to become inclusive, we have a long way to go.

To read more about this issue visit the ACLU's blog or the letter they have written to LSAC.

I think I would have been forced to sit through the pain as well.  I will continue following this issue and hopefully something can be done!

Thanks Ms. JD for highlighting this issue for us.  Unreal.

This doesn’t surprise me.  I had to reschedule (i.e. pay a second fee for) the MPRE because I was not going to be allowed to take in some hard candy or anything else to help stave off morning sickness.  I was told by the accomodations people that I should have called them before the deadline to request the accomodation.  Except of course for the fact that I wasn’t yet pregnant then!  The guy I talked to said it was a common problem, but there was nothing he could do about it, and I either had to take the exam as is or reschedule.  Since I didn’t consider it fair to my fellow test-takers that I would probably get up a couple times to be sick, I chose to reschedule.

Being a single mom is really really hard, splitting your time between work and your kids is next to impossible. I applaud those work at home moms that actually make enough money like that to keeps things going, if anyone has a work at home idea for me I would be glad to get some advice.