Marriage as a means of advancement? 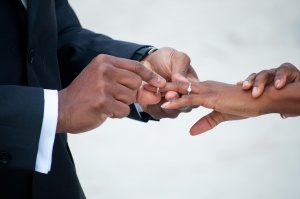 I read with great interest in today's Careerist column about Harvard Law School granting tenure to Professor Jeannie Suk.  Vivia Chen stated that she was surprised to learn that Professor Suk was the first Asian-American woman granted tenure at Harvard, and then looked briefly at the lack of diversity among female tenured professors at the school.

This is a fertile topic of conversation, but there was something that struck me as particularly interesting in the article.  In the original post, Chen said:

"Call me naive, but I was genuinely shocked that this big, prestigious bastion of liberalism didn't have a tenured woman of Asian descent until this year. (Harvard announced Suk's tenure last fall.)  The much smaller Yale Law School, which has 60 full-time faculty members to Harvard's 100, has two--Amy Chua and Jean Koh Peters."

(The article was corrected after this was written to state that Professor Koh Peters was actually a clinical professor, and thus not tenured, making Yale's population of tenured Asian-American professors the same as Harvard's:  one.)

What caught my eye was the fact that by my unofficial count, these three women--Professors Suk, Koh Peters, and Chua--were all themselves married or related to other law professors.  Professor Suk is married to Professor Noah Feldman, who came to Harvard as a tenured professor back in 2007 from NYU.  Professor Chua, she of the Battle Hymn of the Tiger Mother fame, is married to Yale Law Professor Jed Rubenfeld, who Above the Law describes as "a Yale law professor, overachiever, and certified hottie, just like his wife."   Finally, Professor Koh Peters is the sister of former dean Harold Koh of Yale Law School (who is now the Legal Advisor to the Department of State).

So what to make of this?  I know that academia, including law schools, often find positions for spouses of sought-after professors--it's how to get the really awesome professors that many schools are competing for.  Even if the spouse is eminently qualified for the position (and all of these women certainly are, there's no doubt about that), does the fact that they have such superstar spouses or brothers who in at least one case preceeded them in obtaining tenure color their own achievements?  (I don't know the timelines for Rubenfeld-Chua or the Kohs, but as I noted, Professor Feldman was given tenure before Professor Suk.)  Getting a tenured position at the top two law schools in the country is beyond difficult, and there are many, many qualified candidates.  If these women got a slight advantage, or more than a slight advantage, because the schools were either actively seeking or trying to hold on to their husbands/brother, doesn't that implicitly send the message that to be a top-flight female professor of Asian descent you also need a relative on the staff?  And what about other female professors--how many of them are married or related to oter professors, and what effect did that have on their own careers in academia?

Great catch! I wouldn’t be surprised if your hypothesis is correct and these women enjoyed an unusual benefit in the hiring process thanks to their personal relationships/connections.
I’d like to offer two other possible scenarios.
First, I had a professor in law school (she taught my contracts class, but she was renowned for her scholarship in labor law) who was recruited to a higher ranked law school and whose husband (a tenured faculty at another local school) was able to ride her coattails there with her.
Second, I was recently talking to a partner in a large law firm who shared that she believed she would not have attained her position without her husband, a more senior partner at the firm, who was the only person who continued to give her challenging meaningful work when she got pregnant.
There are other plausible scenarios as well. Point is: Relationships Matter.

It seems like the “it’s not what you know, it is who know” line of reasoning extends to marriage as well!

I do agree: the larger point is that relationships matter.  I’ve been the beneficiary of this myself—it’s one of the upsides of being married to someone in the same field as you.  (Whether this offsets the craziness of two lawyers getting married is another thing.)  And in some ways perhaps the professorial relationships are simply easier to see because there’s only a few slots and a lot of us are able to draw the lines between to married/related professors.
Still, I liken the issue of female professors getting a leg up through their familial relationships to the situation of female politicians—many female politicians got their own jobs because they hail from a political dynasty (think Pelosi, Kennedy), or were married to a politician (Clinton, Bono).  I think it goes more to the barriers women face in obtaining these jobs than anything else—those women who can draw on such explicit (male) support are the ones who make it.

agreed.
on the political point - i recently learned that it wasn’t until the 1980s that a woman was elected to a state governorship without first serving as that state’s first lady.  how ridiculous is that?
as for Yale and Harvard, they should both be ashamed: the rate of promotion of female faculty, and women of color in particular is completely unacceptable.

This becomes more mind-boggling the more I think about it.
To think of all of the obstacles that women already face to obtain these positions seems challenging enough (attending the “right” schools, graduating with honors, etc.). But, then to also think that one of the unwritten factors to obtaining these positions is who one MARRIES…is blowing my mind.