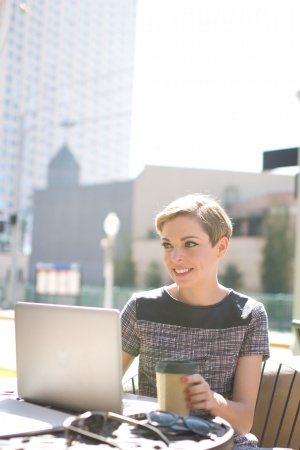 Recently, I had the pleasure of speaking with Emily Wilkinson, an attorney based in California.  I hope that you will enjoy learning about her career path.

1) Can you please provide a brief summary of your professional background?

In 2009, at the end of my first year at Chapman University Law School, I received a scholarship from the Chapman film school to work on a documentary about human rights in war-torn Cambodia.  The documentary, called Giant Steps, premiered at Chapman and eventually aired on PBS. I’d say that opportunity is what launched my legal career because it instilled a belief in me that story has the power to change lives and it spawned a love for working with filmmakers. I had heard about the exciting work the documentary film-based non-profit Invisible Children was doing and subsequently approached (stalked) them about a legal internship at their headquarters in San Diego.

After a year of volunteering at Invisible Children I was hooked, and after graduating from law school in 2010, I proposed to my supervisors that I become In-House Counsel for the organization.  I also suggested that I lead development (fundraising) department as a way to pay my salary and generate funds for the organization.  It was a huge learning curve for me, but I was given the freedom and autonomy to build and grow both departments, as well as the Advisory Council and Board of Directors.  During the time I was there, Invisible Children released Kony 2012, which became the most viral video in history.

After five years at Invisible Children, I began to soul-search and think about making my next career move.  After a wrenching process of weighing my options and speaking with trusted mentors, I decided to start my own law practice. Sam Mazzeo, also an attorney, worked part-time at Invisible Children out of sheer love for the organization. Sam had previously worked at a corporate defense law firm and had become disenchanted (to say the least.) We worked well together and our values, work ethic, and business skills were in alignment, so we pulled the trigger and launched Wilkinson Mazzeo (a few months!) after our initial conversation.

2) You are the Managing Partner of Wilkinson Mazzeo in California.  What type of matters does your firm handle?

We provide legal counsel to causes, creative businesses, and startups within essentially all of the service areas that businesses (big and small) need legal support. This includes for-profit and nonprofit business formation, contracts, intellectual property, labor and employment, and board-building and corporate governance.

3) When I navigate to your website, the initial screen reads:  “Wilkinson Mazzeo: humanizing the practice of law”.  Can you tell me more about that?

We love working with creative people who have innovative ideas and want to put novel (and good) things into the world. Our number one value is authenticity, which we have seen translates to approachability because we believe clients should feel comfortable working with us. We see ourselves as partnering with our clients and more importantly, educating them, so that they can achieve their goals with as little reliance on us as possible.  We keep our overhead low so we can keep our legal fees affordable.

4)  You and your law partner are contributors to Conscious Magazine.  Can you please tell me more about how you are involved?

Sam and I met the founders of Conscious Magazine around the time we launched our practice and have formed a rewarding partnership with them along the way.  We appreciate the opportunity to contribute and write on a variety of legal topics, mainly geared toward entrepreneurial start-ups.  Our monthly column is called “Legal Minute “.

5)  Do you have specific advice for newly minted female lawyers/JDs who are embarking on their careers?

It’s hard to give advice to new female lawyers because there are so many areas of the law to choose from.  I’d say to just think about what kind of work makes you come alive. If you are passionate about it, working hard will come naturally and you will shoot for the moon without question. In my experience, finding my dream job at Invisible Children, facing my fears and pushing my limits gave me the courage to move to the next level, to think and act entrepreneurially and from there, the next step (for me) was to start my own practice.

I also want to share the best piece of advice I’ve ever received. It’s from my personal mentor and former Invisible Children’s Board Chair, Kari Stoever:

“There is nothing more powerful than a woman who’s found her voice. Trust it and don’t be afraid.”

6) Is there anything that I did not mention that would be helpful for the readers to know about your career or your current position?

Yes, Sam and I feel so passionate about helping to further female leadership development that we provide an hour of pro bono (free) legal support to female entrepreneurs.  Sam was raised by an entrepreneurial, single mother, so we both consider this to be a very meaningful aspect of our practice.

Emily Wilkinson currently serves as Managing Partner of Wilkinson Mazzeo, a law firm that provides legal support to causes and creative businesses. At her previous gig as General Counsel at Invisible Children, Emily became a connoisseur of nonprofit and creative legal affairs. She managed and protected their legal rights when they released the most viral video in history (cc: KONY 2012). And before that, she punched multitasking in the face by building the organization’s Advisory Council & Board of Directors. And before that, she directed a documentary in Cambodia that aired on PBS. She’s been balancing her love of law with her love of storytelling and filmmaking ever since. Other loves include not dressing like a lawyer, serving on the Board of TEDx and Creative Mornings San Diego, working on her car (a ‘71 VW Kharmann Ghia named Tigerlily), and hanging with her twin sister (named Rose). Being the incredibly fair and impartial lawyer that she is, she loves all of the above equally (with liberty and justice for all).