Meet Melanie Gleason, an attorney (literally!) on the move in the fight for social justice

By Esther Goldschlager • November 11, 2015•Ms. JD,  Features,  Superwomen JDs and What You Can Learn From Them 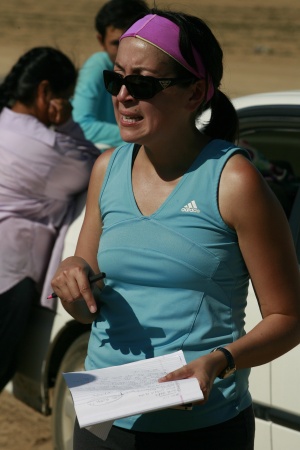 Recently, I had the pleasure of speaking with Melanie Gleason.  Melanie is an attorney (literally!) on the move in the fight for social justice. I hope that you will enjoy hearing Melanie’s inspiring story.

1) Can you please provide a brief summary of your professional background?

Before becoming a lawyer, I was a community organizer and educator. After graduating from The University of Texas at Austin, I moved to Los Angeles where I worked with inner city youth as a middle school special education teacher. The isolation of South Los Angeles and how segregated it is from the rest of the city really impacted me. Working in South LA really confirmed my trajectory in working for social justice for the long haul.

After a few years working in education, I was a community organizer—and focused on electoral and legislative campaigns across the country. The first campaign I actually ever worked on was the 2004 presidential election—I postponed my final semester of college to organize the youth vote in New Hampshire. Even though we lost that cycle, I became fascinated about people powered movements and organizing—and I wanted to learn as much as I could about it. I wanted to know what could happen when a group of people worked together to make change.

So after I left education, I moved to Pensacola, Florida to hop on the campaign trail again for the 2008 cycle. I worked with a team of organizers in Northwest Florida, in the Deep South on the Alabama border. After Obama was elected, I continued to organize for more legislative and issue-based campaigns—I organized full-time as I put myself through law school part-time.

While I was in law school, I interned for different legal services organizations in San Francisco, and did my post-bar fellowship in one of the most underserved communities in the city, Bayview/Hunter’s Point. Working in the community and building one-on-one relationships is something I love doing. I realized that in addition to wanting to work on larger impact litigation and individual cases—I was passionate about helping clients find and own their sense of agency. I wanted to invest more in a client’s longer-term ability to self-advocate.

2) You are a public interest attorney currently traveling the country serving in a pro bono capacity.  How did this project come about?

It was a lifetime’s culmination of experiences—both personally and professionally. I knew that I wanted to do something more experimental with the law. The entire time while I was in law school, I knew that I didn’t want to work at a firm upon graduation. I purposely went to school part-time to try to give myself the most flexibility after I finished. And I think the legal world is always in need of more radical lawyers and ideas to challenge the status quo—and I wanted to be part of that movement.

Specifically, I wanted to see and learn more about communities that are very underserved and underreported. Living in America can often be like living in a bubble—and I’ve found that the legal world can be quite small. But then I started to ask myself: Do I know anyone who has been in an immigration detention center? Do I know anyone who lives on a reservation? And despite some of the diverse experiences I’ve had, I realized that I was also living in a series of community silos. And I wanted to change that.

3) Regarding your pro bono project, where have you traveled and what type of work have you conducted?

First, I was in Delano, California—a rural, agricultural town about two hours north of Los Angeles. I was at California Rural Legal Assistance and worked with farmworkers there and did mostly housing cases. I saw a number of due process issues, such as legal notices being issued in English and not in Spanish, even though some clients only spoke Spanish. I worked on reasonable accommodation requests and other fast moving housing law issues.

From there I went to the Tacoma-Seattle, Washington region where I worked at the Northwest Immigrant Rights Project.  Tacoma has the largest federal immigration detention center on the West Coast. I helped attorneys prepare declarations in support of detainees’ applications for cancellation of removal. Because there are 1200 detainees at this facility and a limited number of attorneys, I also wrote the T Visa pro se (self representation) guide for victims of human trafficking. While in greater Seattle, I also worked at the Housing Justice Project in Kent where I worked on eviction defense cases. The explosive growth in the Seattle area is mirroring a lot of other American cities facing similar housing crisis issues.

And right now, I’m in Cut Bank, Montana—a very rural town of less than 3000 people. Cut Bank is right outside the eastern edge of the Blackfeet Indian Reservation. I am working with a solo practitioner who focuses on Indian tribal law—working with tribal governments and members.  This lawyer is probably the only attorney within 100 miles of here. As a result, she is handling all types of cases, including important impact litigation that can affect thousands of tribal members on the reservation. For example, the main case I’ve been focusing on since I’ve arrived is a suit brought against the federal government on behalf of the Blackfeet tribe for widespread flood damage to homes on the reservation. It’s been eye-opening to see how much impact a truly rural attorney can have in an area.

4) Where is the next stop in your travels and what are your plans relative to pro bono assistance?

I am planning to head south after this—I don’t think my small Smart car will do very well in the northern winter! And I have my sights set on working in Arizona and New Mexico—both states that have detention centers and well as reservations. One of the aspects of my project I am particularly curious about is how different areas handle similar legal issues—and what is going well, and what isn’t going as well.

And in terms of the length of this project, I was originally going to do this project to the end of 2015. But I feel like there is so much more to do and see, and I am definitely going to be extending it into 2016.

5) You are also a coach.  Could you tell the readers about your coaching work?

I also do legal coaching with clients. When I did my post-bar fellowship at Bayview/Hunter’s Point Community Legal in San Francisco, I piloted a legal coaching program. I did that because in the scope of my work, I find there can be a lot of spaces to fill in an attorney/client relationship. And there’s a lot of room to help empower and champion the client. I worked with clients in helping to organize their legal claim so it felt less overwhelming—and taking about how this situation was affecting their personal and professional lives. And I was highly interested in supporting them as they created a plan to support themselves.

6) Do you have specific advice for newly minted female lawyers/JDs who are embarking on their careers?

No idea is too radical. For example, if there is a legal services model that you are thinking about experimenting with, I cannot encourage you to go for it enough--particularly models that involve impacted communities. This type of enthusiastic lawyer can help innovate and expand the reach of much needed legal services to people who need it the most. You would be re-defining what it means to be a lawyer—and to me, that is revolutionary. It is so tempting to play it safe—I was terrified when I gave away all my things earlier this summer to start this project. But along with that was a deep sense of alignment and peace in doing what I felt to be right—to be bold. Overall, I encourage boldness—what was once an idea or a dream can become a reality.

Melanie Gleason is a graduate of The University of Texas at Austin, where she majored in political communication. After graduating college, she was a special education teacher in South Los Angeles. Following her time as an educator, she was a community organizer and worked on the 2004 and 2008 Democratic presidential campaigns in New Hampshire and Florida, respectively. She continued to organize full-time on electoral and legislative issues while attending Golden Gate University School of Law part-time. Upon earning her law degree, she wanted to do something to make a meaningful impact in the legal field and continue serving the underrepresented communities she had previously worked with. Gleason launched her project, Attorney on the Move, this summer starting in Delano, California. Learn more about her project and keep up with her journey by subscribing to her blog or following her on Instagram.