Minding the Business that Pays You 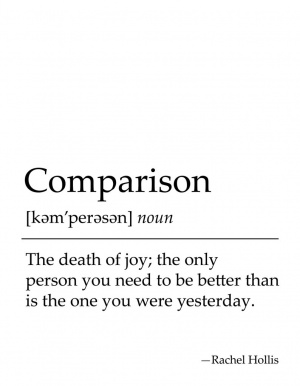 One of the most difficult parts of law school thus far has been fighting the urge to get swept up in the all-consuming comparison trap. "Comparison is the thief of joy” is all too real when it comes to law school even though it is almost human nature to compare yourself with others. Comparison is something that most people utilize because it seems to serve as a way of measuring our success and achievement against someone who we deem to be in similar standing to us.

The hard part about comparing yourself to others is that we live in a time where someone can easily create a fictitious reality and pass it off as real. At this point, I think we all know that as helpful as social media can be in connecting us, it also promotes a false reality where a person can be whoever they want to be and can control the narrative in the light that is most favorable to them. There seems to be a very similar dynamic in law school. Because you are literally stuck in a place in time with your classmates, it is beyond difficult to “mind the business that pays you.” No matter how many times you may tell yourself to focus on you and what you have going on, it always seems like your mind creeps into the imagination of trying to figure out what your peers are doing. Is there some magical outline or supplement that they have? Have they talked to the professor and received some sort of indication as to what will be on the test? Are they employed for the summer? Did they get a better grade than me on the appellate brief? From grades to employment outlooks, it is so hard not to wonder what your classmates are doing and this is where the comparison creeps in. It typically starts small like comparing an answer you stated in class to the one they gave and before you know it, you have made it all the way to exam time, and you are comparing your outline to the outline they “probably” have. Next thing you know, you are comparing yourself and trying to figure out how they landed the summer job they did in comparison to yours or your lack thereof.

Comparing yourself to your peers in a dangerous game and this is mainly because they are presenting their version of reality that they do not mind you seeing. Yes, they may have gotten the highest score on the appellate brief, but little do you know they did below average on the trial brief. Comparing yourself to someone else is never helpful especially when you do not really know what you are comparing yourself to. Whatever may be keeping you up at night, you must remember that you can only measure your success against yourself.

One way to get through law school with a lot less hassle and stress is by doing your best and by being genuinely happy with what you’ve done because if you’ve done your best, then that really is all you can do. Instead of comparing yourself with others and competing with others, compete with yourself. Challenge yourself to be better in any aspect of your journey that you feel can use improvement. Not only will you be bettering yourself, but you will be focusing on what really matters and that is you.