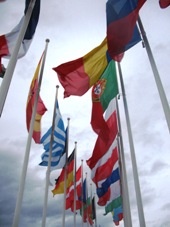 The United Nations is the flagship entity in the international sector, and has opportunities for lawyers at headquarters and in the field to work in international law. Similar to the State Department’s Office of the Legal Adviser, the UN has a central Office of Legal Affairs, based at headquarters in New York. The Office of Legal Affairs (OLA) serves as in-house counsel to the UN Secretary-General, the Secretariat as a whole, and the rest of the UN organs.  The OLA is lead by an Under-Secretary-General, an Assistant Secretary-General, and staffed by 160 attorneys. The Under-Secretary General serves as chief legal counsel to the UN.

The OLA’s stated mission is “to provide a unified central legal service for the Secretariat and the principal and other organs of the United Nations; to contribute to the progressive development and codification of international public and trade law; to promote the strengthening and development as well as the effective implementation of the international legal order for the seas and oceans; [and] to register and publish treaties, and to perform the depositary functions of the Secretary-General.”

The OLA is broken into seven offices: Office of the Under-Secretary General, Office of the Legal Counsel, General Legal Division, Codification Division, Division for Ocean Affairs and the Law of the Sea, International Trade Law Division, and the Treaty Section.  Its lawyers handle international law issues one would expect: advising on law of war, peacekeeping operations, trade law, international criminal justice, treaty law, and international organization privileges and immunities, in addition to traditional areas of law, including administrative and contracts law. Current focuses of the sitting Under-Secretary General Patricia O’Brien and her office include international criminal justice and the fight against impunity, the concept of the “responsibility to protect” or R2P, and nautical piracy.

Although the UN is an intrastate organization, the attorneys at the UN represent and work in the interest of the organization, not their home countries. These lawyers must deliver objective legal advice to support political-decisionmaking in the UN. Lawyers have the opportunity to travel to field offices and to field operations to deliver legal advice, an exciting and challenging dimension one cannot find at a law firm. UN attorneys are truly on the frontlines of international law and policy.

There are several pathways to a position at the OLA. Most attorneys are laterals, and it is an extremely competitive hiring process. The UN posts vacancies on its central online job database. Unpaid internships at OLA are also extremely competitive, and can be undertaken by those who have a bachelors degree and have completed at least one year of law school or the equivalent. Another pathway is through the UN’s Young Professional Programme (YPP), a highly competitive programme for those under the age of 32 with at least a bachelors degree. Through YPP, individuals get hired for a 2-year appointment as a UN civil servant, with review for renewal after 2 years. Nationals from certain countries, including the United States, are eligible to apply each year for a position in a particular UN division, and the countries eligible and divisions open change on an annual basis Although this process does not appoint candidates directly to the OLA, once one has her foot in the door at the UN, it would facilitate an easier move to the OLA.

For more information on the UN’s OLA, go to: http://untreaty.un.org/ola/Default.aspx

On UN YPP, go to: https://careers.un.org/lbw/home.aspx?viewtype=NCE&lang=en-US