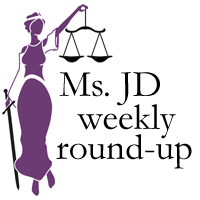 USC alumna became a lawyer in the 1930s despite gender bias

Phyllis Norton Cooper, a woman who attended law school in the 1930s, is remembered for her many achievements.

Former Qwest CEO's attorney has made winning a habit

Maureen Mahoney, a Latham Watkins attorney who has argued before the U.S. Supreme Court 18 times, is praised for her oral advocacy.

Margaret Chiara, one of the U.S. Attorneys who was allegedly fired for political reasons, has a new position as general counsel for a bipartisan federal commission looking at prison rape.

For woman player, there's no crying in football

Lawyer Jennifer Blum is a wide receiver for the New York Sharks, which is part of the Independent Women's Football League.

Female prosecutors in Texarkana are praised in an article you'll either love or hate due to its use of expressions like "They’re tougher than they look" and "Break the law in Texarkana and the lawyer prosecuting your case may just be wearing a skirt and perfume."

YOUR LEGAL WRITES: Resolving to be a better firm

West Virginia's Legal Journal considers strategies to improve law firms, including "looking for unique ways to retain female lawyers and managers who believe motherhood is as important as a successful career."

Are we missing an article that should be here? Let us know at roundup@ms-jd.org.