Ms. JD at William & Mary: A Lunch with Justice O’Connor 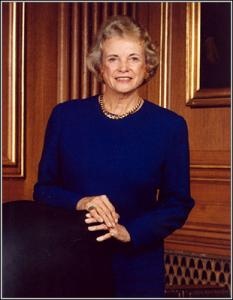 Fifteen lucky students arrived for Saturday’s lunch with retired Supreme Court Justice Sandra Day O’Connor with tickets in hand and questions on their minds. Questions ranged from the current state of the legal profession to judicial accountability.

The question that seemed to be at the top of everyone’s mind was the most obvious for a group of intellectually curious students: which case had Justice O’Connor struggled with the most during her time on the bench? Justice O’Connor surprised students when she said it was an income tax case that she assumed none of us had heard of. Indeed, she failed to share the name with us, and a simple Google search proved fruitless in finding the precise case she was alluding to.

Also on the forefront of each student’s mind was the current state of the legal profession. Justice O’Connor shared with us her own struggles finding a job after graduating from Stanford’s Law School. No law firm in California wanted to hire her because she was a woman. The only job offer she received was one as a legal secretary. She did not allow this to derail her aspirations. Instead, she resolved herself to using creativity in finding a job. She accepted an unpaid position with the San Mateo County Attorney’s Office. Despite the lack of pay, she looks back fondly on her time there. She used this story as an example of the fortitude, passion, and commitment young lawyers should bring to the legal profession. By resolving herself to practicing law in any manner possible, Justice O’Connor entered the profession with an open mind and heart.

In addition to stressing the need for creativity and resolve, Justice O’Connor also emphasized the need for fostering civility and camaraderie within the legal profession. She suggested that graduating students join an Inn of Court. Based on the traditional English model of legal apprenticeship, American Inns of Court help lawyers become more effective advocates by emphasizing ethical awareness and civility in the practice of law. It was an idea first promulgated by Chief Justice Burger in the early 1980s. In 1985, a committee of the Judicial Conference of the United States endorsed the American Inn of Court concept and created the American Inns of Court Foundation. Students interested in joining an Inn of Court, should visit: http://www.innsofcourt.org/Content/Default.aspx?Id=4. The Inns of Court closest to William & Mary are The John Marshall Inn of Court in Richmond and The I’Anson-Hoffman American Inn of Court in Norfolk.

Justice O’Connor also spent a considerable amount of time discussing judicial accountability for elected state court judges. She opposes the direct election of judges, and points to the recent Caperton v. A. T. Massey Coal Co. Inc. case as a prime example of the perils associated with this mode of judicial selection. A judge cannot be a slave to two masters—the law and justice on one hand, and the people who funded their campaign war chests on the other. Justice O’Connor is, instead, a supporter of the Arizona model (a model of judicial selection she was influential in designing while in the state senate). In Arizona, a commission of both citizens and attorneys choose a list of judicial nominees. From this slate, the governor selects a candidate to submit to the state senate for confirmation. Once Arizona judges are selected and confirmed, they must stand for periodic retention elections. Justice O’Connor believes that this system best fits both the model of judicial selection the Framers’ envisioned and the modern realities we face over issues of accountability at the state court level.

In answering each question, Justice O’Connor was careful to remind us that creativity, accountability, and civility are the hallmarks of our chosen profession. The fifteen students who entered that room with questions abound, left with not only answers but also with an image of enthusiastic young lawyers eager to enter a changing legal field—a field that is not unraveling, but rather re-forming.