By Katie Day • January 21, 2017•Ms. JD,  Conference,  Careers,  Firms and the Private Sector,  Features,  Superwomen JDs and What You Can Learn From Them 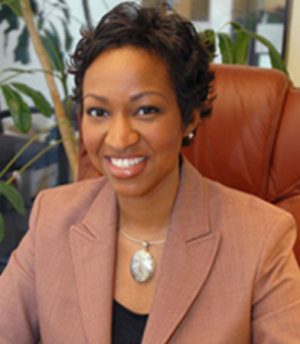 Laurie Nicole Robinson Haden—an award winning lawyer and agent of change—truly personifies the 21st century businesswoman whose skills, passion and commitments are multi-faceted and the beneficiaries of her associations and accomplishments are many.

Laurie Robinson Haden is the Senior Vice President and Assistant General Counsel of CBS Corporation. In 2015, she was tapped by CBS Corporation for a new role within the Litigation Department reporting to the Head of Litigation. In this new position, she oversees and manages outside counsel, directs legal strategy, and participates in alternative dispute resolution. In addition, she continues to spearhead important law department initiatives, including CBS’ in-house CLE program, records retention program, and the development and maintenance of the law department Intranet.

Mrs. Robinson Haden has been extended many leadership opportunities since joining CBS in 2002. Before moving to work with the parent company, she served as Director of Training and Development for its subsidiary CBS Broadcasting, Inc. and as Assistant General Counsel in the Labor and Employment Division. She was then promoted to Vice President reporting directly to the Executive Vice President and General Counsel of CBS Corporation. In that role, she oversaw law department operations and administration, the law department diversity program, and the launch of CBS’s company-wide records retention program. From there, she was promoted to Senior Vice President and Assistant General Counsel.

Mrs. Robinson Haden is the author of several legal-related publications; has contributed to a quarterly column on diversity in Inside Counsel magazine and contributes to the CBS Corporation Diversity Blog. She has presented at the American Bar Association, the Inside Counsel Super Conference, the National Bar Association and the Minority Corporate Counsel Association.

In addition to her role at CBS Corporation, Mrs. Robinson Haden is the founder and CEO of Corporate Counsel Women of Color, a non-profit professional organization, which she created in 2004 to advance women of color attorneys and to foster diversity in the legal profession. In this role, she provides strategic leadership within the areas of branding, publishing, business development, web development and interactive, marketing, sponsorships, and fundraising.

Mrs. Robinson Haden received accolades for her leadership including being recognized by the Coca-Cola Company’s legal department and receiving the Women’s Venture Fund’s Highest Leaf Award, the Charting Your Own Course Spirit Award, the Groundwork, Inc. Impact Award, the Black Women Lawyer’s (Los Angeles) Power of One Award and the Black Women Lawyer’s (Chicago) Diversity Visionary Award. Mrs. Robinson Haden was featured in the annual women’s issue of Ebony Magazine in recognition of her leadership, ability to inspire others, and effectuate change. She was named to the Network Journal’s 40 Under Forty List, Precious Times magazine’s 15 Christian Leaders, Pink magazine’s Top 15 Women in Business, and was highlighted as one of the legal industry’s women leaders in Vault’s View From the Top: Advice from Legal Women Leaders.

Mrs. Robinson Haden was honored by the National Bar Association’s Women Lawyers Division and recipient of the very first M. Ashley Dickerson Award by the National Association of Women Lawyers. She is a recipient of the New York City Bar Association Diversity Champion Award and the New York State Bar Association Diversity Trailblazer Award. Moreover, she is a recipient of the NAFEO Distinguished Alumni Award and the Shropshire Group, Inc.’s Humanitarian Award. She was bestowed with the prestigious recognition as one of the “10 Up-And-Coming African-American Lawyers to Watch” by Diversity & The Bar magazine; and was listed as a “Power Broker” by Inside Counsel in its GC 50 list of the most influential in-house counsel in North America. In 2010, she was a recipient of the Indiana University School of Law – Bloomington’s Distinguished Alumni Award; the Neighborhood Defender Service of Harlem’s Corporate Social Responsibility Award; and the George W. Crawford Black Bar Association Visionary Award. In 2011, Mrs. Robinson Haden was awarded the Ronald H. Brown Distinguished Leadership Award from the University of the District of Columbia and the ACC’s 2011 Matthew J. Whitehead II Diversity Award. In 2012, she was awarded the Chambers and Partners 2012 In-House Counsel Up & Coming Lawyer of the Year and the National Bar Association’s Pinnacle Award. Recently, Mrs. Robinson Haden was selected as a History Maker in the field of law. In 2014, she was awarded the Network Journal’s 25 Most Influential Black Women in Business Award. Recently, she was named to Savoy magazine’s list of the 2015 Top Influential African-American Lawyers in America.

What an inspiring leader! I wish I could be there to meet her but I will be trachung in Santiago as a legal scholar in residence. I hope you have a marvelous turnout and strong show of support. She should tune for Senator! We need women like her in the Senate!