By Tatum Wheeler • June 05, 2018•Ms. JD,  Writers in Residence,  Careers,  Issues,  Mentoring and Networking,  Women and Law in the Media 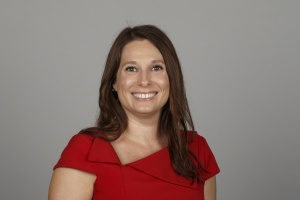 Last month, we were introduced to Bobbi-Sue Doyle-Hazard, Assistant General Counsel to the Tampa Bay Buccaneers.

Bobbi-Sue graduated in 2007, the crux of the US recession. After waitressing and building her legal skills through CLEs, Bobbi-Sue took on a few clients as a sole practitioner. A very early adopter of Twitter (she even has her first name as her handle! @bobbisue), Bobbi-Sue used Twitter to comment on her life, eventually being profiled in the Boston Business Journal. As a result of the story, a local businessman hired her as in-house counsel at New England Cryogenic Center. Through Twitter, Bobbi-Sue was also introduced to David Cohen, a sports lawyer and former General Counsel of the Tampa Bay Buccaneers. This ultimately led to her being invited to interview at the Tampa Bay Buccaneers, where she now serves as Assistant General Counsel.

As someone who’s found not one but two successful jobs in selective industries, let’s take note of Bobbi-Sue’s networking tips. Just remember, it’s as easy as BUCS!

B lock off time: Bobbi-Sue blocks off a section of time weekly to focus on correspondence. Through reminders with her online calendar, this time is focused on following up with contacts, setting up time to meet with others, and sending out congratulations (more below).

U se what’s available: All lawyers have to take CLEs. Bobbi-Sue used CLEs after graduating law school to gain practical skills, such as learning how to make a court filing. Instead of seeing them as a requirement to cross off the list, take advantage of using them to learn and network. As Bobbi-Sue recognizes, though some will be terrible, for the most part, there’s usually good food and interesting people.

C onnect meaningfully: In a selective industry like sports, it’s hard to infiltrate an organization. As Bobbi-Sue’s example illustrates, it is not by any means impossible. Focus on building real relationships and maintaining those relationships.

If you’ve signed up for a big event, like a law conference, focus on talking to people you don’t know and are interested in meeting. For instance, Bobbi-Sue will look at the attendee list of an event a few days in advance and make her own list of those that she hasn’t connected with previously. As sometimes those events are not the most conducive spaces for long conversations, she’ll often focus on a simple introduction and ask for a later meeting. You could say, “I’m ___, here’s my card. I’d really love to get to know you more. Let’s schedule some time for a phone call next week.”

S upport others (and yourself): Though it may not be what you think of when you hear networking, supporting others can still play a major role. As part of her time, Bobbi-Sue sends out congratulations to women that break through to top positions. This has been a great icebreaker which has increased her network and resulted in meaningful relationships.  Find your own way to support others in networking.

And, remember, as shared by Bobbi-Sue “something we always forget about is that we can make a choice to do something different at any point in time. We’re not 100% stuck. There may be factors that make it more difficult, but I don’t always have to be a lawyer, or go to bed early, or only have a cat. I can make a decision to change aspects of my life. Once you see that, obstacles can become opportunities.”

Thanks for the tips, Bobbi-Sue!

Tatum Wheeler is a fellow law aspirant based in the San Francisco Bay Area. When she’s not working, she spends her free time exploring new trails with her dogs, reading narratives, and cheering on her favorite sports teams. Please feel free to contact her with any questions, comments, or requests for further advice.