No Pressure - Just Be Perfect 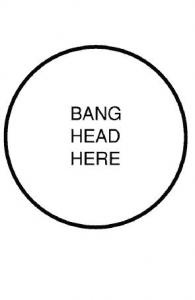 Exactly four years ago one of our founding bloggers submitted this great post. Our board easily identified it as a "Best of" that still rings true today.

I was having a great weekend (given that Ms. JD had its national launch at Yale Law School on Saturday) when I opened up my Sunday Times. Great, I thought: just as was noted in Ms. JD’s presentation at the start of Legally Female, The New York Times has gone six months without some earth-shattering revelation about women, so another pronouncement was due. (Previous hits have included the announcement that we were in the midst of an opt-out revolution, the glass ceiling still exist at top law firms, that the Supreme Court was not all that interested in female clerks, or that young girls are now going to top colleges only with the intention of obtaining their M.R.S. degrees). (H/T to Feminist Law Professors’ Caitlin Borgmann, who noticed the same phenomenon here.) My expectation that this article would join those others in the “Irksome” category was confirmed with the title: “For Girls, It’s Be Yourself, and Be Perfect, Too.” But I was surprised to find that this article did not inspire me to write a letter to the editor about how incredibly wrong the author had gotten things. In this case, I believe that Sara Rimer has captured a distinct phenomenon. One reason for my change in sentiment is this article struck much closer to home than the others. The usual caveats apply: it is discussing primarily white, middle-to-upper class girls who are already at the top. Rimer gives this group the new title “amazing girls,” defined as: “Girls by the dozen who are high achieving, ambitious and confident (if not immune to the usual adolescent insecurities and meltdowns). Girls who do everything: Varsity sports. Student government. Theater. Community service. Girls who have grown up learning they can do anything a boy can do, which is anything they want to do.” The article goes on to detail the trials and tribulations of some of these girls who attend Newton North High School, located in an affluent suburb outside Boston. And while there are plenty of holes to poke in everything (seriously: someone tell all these girls that what college you get into does not seal your fate forever! Nor is proxy for success in life! Or, as they are apparently discovering, a guarantee of happiness!), it nevertheless struck a nerve. I felt like so many women I know now are those girls, only older. Myself included (although I might characterize myself more along the lines of “crazy extracurricular girl” or “no-sleep girl”). Now that we are in law school, where some of those former “amazing girls” end up and, for most, is the last stop on our education track, you would think that we would finally sit back and not take on so much, but you would be wrong. Apparently we haven’t gotten the message. Of my peers, the crazy over-committed ones are all female. While we are driven at this point by more than a burning desire to get into college, there is still that compulsion, pressure, desire to be the best we can be, and incredible feeling of being overwhelmed most of the time. The upshot? Part of this trend is that “amazing girls” grow up to be “amazing women,” and as far as I’m concerned, the more amazing women out there, the better. But based on my own limited experience, I have to say that the downside might relate to some of the other issues women in the legal profession are struggling with (the so-called opt-out problem, or how to have a life and a job): it burns you out. I’m not that old, but I feel old, particularly after years of putting in late nights, surviving on too few hours of sleep, and feeling under constant pressure. After two years of law school, I need a long break, but that isn’t likely to happen. So perhaps we need to learn to comfortable becoming “pretty good” after being “amazing,”—as Dahlia Lithwick said in a similar context, to accept B-pluses even when know we can get As.

Another side to this drive to be perfect that is sadly not lost by the time we hit law school is the problem of eating disorders.  This is often a part of the lives of “amazing girls” that continues into their adult lives, and is something that I haven’t heard a lot about in law school. But that’s why I have the internet.  Here are two very good posts on the subject.  The first, The Un-Pretty Perfect Girl, from Feministing, uses the New York Times article as a starting point, and pushes further by pointing out the “underbelly”: “It’s not just about Ivy League admittance or extracurriculars. It is about a nation of women buying in to the idea that their wellbeing is not as important as achievement and beauty.” The second, Purge, an older post at Opinionistas, does stay in the world of female lawyers, specifically those in law firms:  “The culture of large law firms is one of absolute perfectionism. Typos, tardiness, missed deadlines and stray blunders are simply not options in this environment overflowing with human achievement-machines billing 15 hours every day on some of the most lucrative and important cases or deals in the country. In order to thrive in such an atmosphere, many female associates become card-carrying members of the cult of modern perfection, whose creed clearly dictates that mediocrity is worse than failure, failure is not acceptable, and cellulite is insupportable.” Absolutely check them out.  And thanks to Jessie for the links.

Does anyone else see this as proof of that old addage “women need to work twice as hard to receive half the recognition”? I hope these girls continue to be motivated and become outstanding women who will be role models for the next round of girls.  I also hope they make it easier for others to reach the same levels of success without having to do “everything”.

Hey Matti,
Good point.  Your comment reminds me of the video clip we have of Judge Tacha here: http://ms-jd.org/node/162  She recounts how she was told by a mentor, “Don’t you know you have to better than the men?”

This article is right on- there’s a book about this phenomenon too called Alpha Girls.  If you’re interested in this topics, I also recommend Schoolgirls by Peggy Orenstein - who is an amazing author by the way. Law schools fuel this to some extent though.  They want great placements rates to up their rankings to get more perfect people to pay their outrageously high tuition.  While 75 percent of people in my classes get a B+ or below, that’s still not seen as a “good grade.”  Can you believe that?  You can be in the top half or top third of your class and still be just average.

<div align=“left”>The other problem I've noticed with women who strive for perfection is those (myself included) who eventually hit the wall where you try SO hard to do something perfectly that it just doesn't work.  Sometimes, I think if we would just go for "good" instead of "amazing," we would accomplish a lot more.
</div>