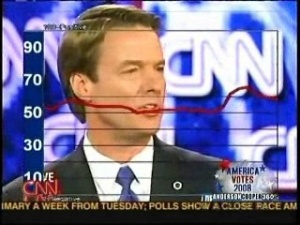 So in the scuffle that was the Democratic Presidential Debate last night Clinton and Obama exchanged a number of accusations including that Clinton served on the board of directors of Wal-Mart; Obama worked for a law firm that represented an inner-city slumlord. Whether or not those barbs are accurate, in good taste, or relevant has generated a lot of media coverage. But the accusations that really caught my attention were the references both Clinton and Obama made to their opponent's service with "corporate law firms."

There are a number of ironies here. First, lawyers are overwhelmingly liberal - why villify them? Second, both candidates share this credential - why villify it? Third, if you're going to attack a politician for being a lawyer, isn't the conventional wisdom that you attack Edwards, the millionaire "ambulance-chaser"?

Since when did corporate lawyers become the enemies of Democratic voters? Don't get me wrong, I'll be the first to take a stab at the profession in general and at BigLaw culture in particular. Still this exchange struck me as a new (and I might add counterproductive) twist on lawyer-bashing. Have the bad bank deals, pension fund scandals, tax schemes, and liability-free oil tankers finally turned general public attention to the dirtier deeds of corporate lawyers? Maybe corporate lawyers have always been the subject of such public attack, but my impression was that such cynicism was largely reserved to law school faculty meetings, public interest seminars, and my dinner table.