By Carissa Mulder • February 14, 2012•Nonprofits and the Public Interest 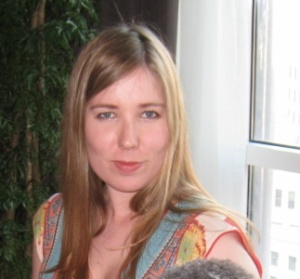 Hello again!  Through an odd quirk, I wound up interviewing Leah Boyd, who also worked for IJM, the organization from last month, so I'll skip the general background information this time. Please shoot me an e-mail at carissa.mulder@gmail.com if you would like to be interviewed for the blog or have any questions you'd like me to ask. Cheers!

I grew up on a farm in Kansas, went to Azusa Pacific University in Azusa, CA and majored in Political Science.  After graduation, I took a year off and worked for my dad on our farm because I wanted a break from reading and writing before I went to law school.  I graduated from Washington & Lee University School of Law in Lexington, VA in 2005.  I’ve got two sisters and a brother – my older sister is currently teaching 1st grade in Kyrgyzstan and my younger sister is a vocal music teacher who is currently substitute teaching in Kansas.  My younger brother is developmentally disabled and lives at home with my parents.  I love to host brunches for my friends and I’m always looking for an excuse to bake for someone.  I also love to travel, and I’ve been to such diverse destinations as China, Tajikistan, and Sri Lanka.  My next trip is to Antarctica.  I don’t have a home per se right now while I’m trying to figure out the next step – I’m splitting my time between Kansas and Dallas.

IJM is an amazing organization, and I am humbled to have been a part of it for one year.  It is full of regular people who are doing amazing things simply because they have shown up and are fighting for people who don’t have the ability, for whatever reason, to fight for themselves.

1. How did you wind up at IJM? Was this your first job out of law school, or did you have other positions before this one? Where has your career path taken you?

I spent the first five years after law school in the trial section of a large law firm in Dallas, Texas.  During those years, I had a lot of great experiences and worked with a lot of great people, but my desire to help individuals in a tangible was simply wasn’t satisfied by the work I was doing.  I talked to a lot of people about different ways in which I could use my legal degree and training to help people, and International Justice Mission’s name kept coming up.  During lunch with a friend, she mentioned that IJM had a year-long fellowship program, and I decided to look into it.  Within six months, I had been accepted into the program and was making plans to move to South Asia for one year.

2. Have you always been interested in working in the human rights area, or did this interest develop after you had already started your career?

I’ve always been passionate about justice and helping people who don’t have the ability, for whatever reason, to help themselves.  This probably springs from the fact that my brother is disabled, and if he didn’t have a loving family to take care of him, he would be completely helpless and prey for various predators.  I became interested in International Justice Mission and the work they were doing to free slaves and help widows and orphans who were the victims of violent oppression during college when I heard Gary Haugen, IJM’s founder, speak.  I heard him speak about how his faith in God connected with his passion for justice, and I thought “I want to work for him.”  Fast forward 10 years, and I finally had the opportunity to transform that desire into action.

During my year in South Asia, I sought to provide support for the national attorneys in whatever capacity I could.  I wasn’t licensed to practice law there, so I couldn’t do any courtroom advocacy.  Most of my days were filled with research projects, creating and implementing training programs for the advocates, and drafting pleadings.  I also helped witnesses prepare to testify in court and analyzed judgments when we received them.  It really was an amazing experience to be on the front lines of the fight against sex trafficking and see successes happen that people told us were impossible.

One of the favorite parts of my job was working with the national advocates to refine their  legal arguments.  Hopefully those skills will continue to improve and they will be even more effective advocates for the women they represent.  I also loved not billing my time in 6-minute increments.

One of the most challenging aspects of the year was getting used to the system of legal research (back to the books!) and the different understanding and use of precedent.  American courts are much more likely to take a principle from one case and apply it to a different scenario – like taking a holding on a search in a drug case and applying it to a search in a murder case.  Not so in the country where I worked – most courts would disregard the drug case simply because it involved drugs, not murder.  It was a challenge to find cases that we could actually use in our cases, but as IJM is helping to create more relevant case law, this will eventually get easier.

My job was similar to traditional jobs in that I did a lot of research and writing.  I created some research briefs that will be available to the national attorneys if certain issues arise in the future.  Like I said earlier, I helped witnesses prepare  to testify.  My job was different in that, for me, the stakes were much higher than I was used to.  Although there had been a lot of money at stake in some of the cases I worked on at the firm, now it was a matter of seeking to right a grievous wrong and making sure the perpetrators were punished for their crimes.  It was also different in that I spent a lot of time working directly with the advocates – whether helping them refine their arguments or just assisting with editing – I spent a lot of time in a “teaching” role for people newer to the legal field.

5. What has been the most meaningful experience you've had at IJM?

Last May we were working on a case in which we had ample evidence of the suspect’s guilt, but doubted whether we would be able to get a conviction, based on past trends in this court. This was discouraging, but we kept helping our witnesses to prepare and submitted the best closing arguments we could.  And we prayed.  After almost two months of delays, the judge finally issued his decision:  guilty!  And it wasn’t just a slap on the wrist.  He sentenced the brothel keepers to 7 years in prison (sentences are rarely more than 2 years long) AND he ordered the defendants to pay the victims the equivalent of $600.  Although this may not sound like much, the highest compensation award one of IJM’s clients had ever received prior to this case was $100.  We were so excited and encouraged.  Here was a strong signal to perpetrators that holding women against their wills in brothels was not going to be tolerated any more.  And to top it off, less than two weeks later, we received a conviction in a different case with similar obstacles in which the judge awarded the victim the equivalent of $1,000.

6. If women are interested in pursuing a career with an organization like IJM, what steps do you recommend they take? Do you have any other advice for them?

Before I pursued anything with IJM, I took on a pro bono case in which I helped a man who fled persecution in his native country to receive political asylum in the U.S.  Through that experience helping someone who could not navigate the legal system on his own and really helping someone on a personal level, I knew that I wanted to get more involved in human rights and justice-related issues.  Based on my knowledge of IJM, I knew they would be a perfect fit.  If you are interested in this kind of work, find out what is going on in your area.  In Dallas, the list of organizations includes Human Rights Initiative, Mosaic Family Services, Catholic Charities, and Advocates for Community Transformation.  Chances are there are immigrants or other individuals who may have experienced some form of injustice and the people trying to help them need someone with a legal degree.  Not everyone has to go overseas to do this work – a lot of times the work is all around us.  We just have to figure out where to look for it.