Is opting back in really a trend? 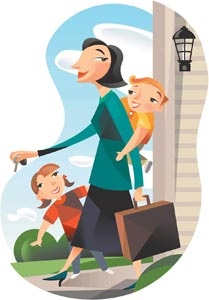 What would we do without the New York Times’s Lisa Belkin?  I know that I’ve acknowledged that every now and then, the Times gets it right, but I’m returning to my default position, which can be summed up like this: oh, come on.

This time my neck hairs are up about Belkin’s claim (nay, confession!) that she brought to a head the opting-out issue with her infamous “Opting Out Revolution” piece.  Oh, Lisa.  The Times might be all the news that’s fit to print, but this issue did not reach some theoretical high water mark because of one article.  This phenomenon in women’s working lives started a long time before that, and it has not abated.  Furthermore, as has often been the case with these kinds of pieces, this article undermines its own import by being in the “Styles” Section, rather than the Business or National news section.

But beyond my own petty complaints, I think that critics have gotten their point across to Belkin, because she does a lot of disclaiming in this particular piece, entitled “After Baby, Boss Comes Calling.”  After taking about a new phrase for us to learn—“opting back in,” which is apparently the “growing acceptance by business of a nonlinear career”—she goes on with this:

I have been writing about life and work long enough to know that a change in policy is not the same as real change. I hear regularly from workers who were all but laughed at when they tried to take advantage of a flexible program that was nothing but corporate window dressing. Or who work for a company listed in Working Mother’s “100 Best Companies” but who are at the office nearly every weekend.

Well, okay.  That’s probably a fair disclaimer.  But she continues on with a paragraph that can be summed up as a lot to swallow:

So I am too jaded to believe that this small handful of trendsetters will bring transformation overnight. They will not change the fact that too many employers still look at a résumé gap as a disqualifying mark; or that women who leave and return pay an average 18 percent salary penalty compared with those who never pause; or that men feel constrained from asking for flexibility because it carries a stigma; or that the only way to eliminate the stigma is for men to start to ask.

That’s quite a ditch those women have dug themselves in, right?  My initial reaction was a sort of knee-jerk why-is-it-always-the-women’s-problem-to-deal-with?  Yes, there is that line about men needed to also start asking for “flexibility,” by given the acknowledgements that that gaps in the resume are not so hot, and there’s a salary drop when (if?) you get back to work (nearly a fifth less pay!), no wonder men are reluctant to take that kind of hit.   But doesn’t it seem like it’s the employers who need to be given a closer look?

What I think is important in this article is its acknowledgement that the cost of women leaving the workplace is becoming great enough that (some) companies are willing to change their tune:

A looming worker shortage, brought on by the imminent retirement of the baby boomers, means off-ramped employees, already trained and battle-tested, will be increasingly valuable.  This means more of what we have already seen: flexible work schedules, telecommuting, job sharing. Women in particular, but also a substantial percentage of men, have made it clear that is what it will take to keep them loyal.

And that is the only thing I kind of like about this piece: it’s pushing (a little) on companies to feel that they need to have these options to keep up in a tightening labor market.  Hopefully, companies like Heller Ehrman, whose Opt-In Project studied their business practice and “plans to unveil a proposal to abandon the idea of billable hours that is deeply ingrained in the [legal] profession,” will follow through on this big talk.  (I personally am not a fan of billables, as you can tell from this.)

But it’s only if I see some of these changes really happening—when there is a real trend among law firms to chuck billable hours (rather than hiking associate salaries and the workload that is concomitantly raised as well), or there is some statistically significant number of companies have active opting-in programs—that I can echo Belkin’s hopeful send off that the scattered examples she cites are a “a promising, and important, start.