How to Play Your Cards 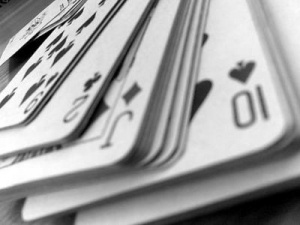 In my opinion, the most challenging thing about being a career woman is learning how to play your cards. I simply mean this: there are certainly stereotypes which precede women in the workplace -- submissive, peacemaker, courteous, docile, prim, proper, ladylike, etc.
And it's true that there's a time and a place to correct such assumptions, but it's also true that there are times when such assumptions might work in our favor in terms of gaining an advantage for our clients. For example, a woman who is naturally abrasive, when representing a client in a particularly rural town in a southern state, might adopt a trial personality more palatable to jurors. To some, this might come across as perpetuating stereotypes, selling out, or denying people an opportunity to see a perfectly capable and strong woman in her element.
In short, such decisions to accommodate our behavior may very well be characterized as detrimental to ourselves, women in general, and to those persons who were denied an opportunity to interact with our true selves. Others, however, especially in the field of law, might believe that the decision to modify one's behavior as the situation necessitates, is the only ethical decision. Otherwise, they query, could a female lawyer really be said to have provided the best advocacy possible for her client?

As I said before, these calls, and the millions more that female lawyers face every day, are tremendously difficult calls to make, both personally and professionally. At some fortunate crossroads, the decisions we are called to make are not mutually exclusive. At times, we have the luxury of advocating for our clients in a manner that is consistent with our own beliefs and personalities, but the possibility of such opportune situations doesn't negate the existence of those more challenging crises.

For the sake of illustration, I'll offer a particularly relevant example that a friend shared with me. She happened to be working at a defense law firm where the trend during summer months had been for the summer clerks to be treated to some special perk every Friday. Problematically, however, these special perks were sexually segregated, such that the men were taken golfing and the women taken to get pedicures. Now, I'll be the first to say that I love and enjoy a good pedicure, but she found herself in one of those tough situations mentioned previously. She could get the pedicure and interact with the numerous other paralegals and secretaries, or she could ask to go golfing so that she might interact with the partners, most of whom were male. If the latter was her choice, however, she would be placed in the uncomfortable situation of being the only female among 30-40 men. She did just that, however, and in having to explain herself, came across as rather abrasive. In contemplating her situation, I was forced to grapple with the questions, "Was it right to raise the issue? Should she have let it go? Twenty years down the road, would she have been trapped under the glass ceiling or becoming the first female partner?"  Answers are elusive because, as in her case, she was not asked back the following summer.

What I do know is this: women are daily put into situations where we are forced to make mutually exclusive decisions -- providing the most strategic advocacy possible for our clients, or forcing jurors and others to come to terms with our layered, multifaceted personas. These are the tough calls, and it appears to me that the wisdom to handle these situations comes with time and experience. Meanwhile, I am grateful for those women who have graced me with tactful responses and practical wisdom. And I am grateful for organizations such as Ms. JD, which serves a critical role in offering young women the tools we need to succeed in this field.

As a woman who has never paid for a pedicure and who grew up playing golf, I was really upset by the story in this post.  I'd rather play golf any day! Even if most of my friends would choose otherwise, sex segregated activities cannot be the way to go.

I am troubled by the idea that a woman isn't providing the best possible representation for her client if she refuses to actively play into and exploit stereotypes.  It seems like we're throwing in the towel and saying, "Oh well, these gender stereotypes exist, and there's nothing I can do about it, so I may as well use them to my advantage."  The irony is that as long as women are willing to play into such stereotypes, the longer they'll persist.  If women refused, then over time men and others would be forced to reevaluate the stereotypes.  Also, I disagree with the logic that you need to bat your eyes and use your sexuality or "femininity" to win a case.  Even if it is true that a judge, jury, or client would favor you (and there's really no way to test this theory since it's not like a jury member is going to admit, "Yeah, I thought the defendant was guilty, but I voted not guilty because the defendant's lawyer  showed a little leg."), it's ridiculous to think that you owe it to your client to wear spike heels and flirt with the judge.  There are plenty of things a lawyer could do to win a case but wouldn't (i.e. perhaps you could sway the jury by throwing a racial slur into your closing, but no one is going to tell you that you owe it to your client to do such a thing).  Asking women to play up sexual stereotypes is much the same, and tactics like these have nothing to do with your skill as an attorney and everything to do with the shortcomings of your audience. Playing to the lowest common denominator is never the way to make progress.

The old saying comes to mind—if they don't want you there—would you really want to be there? Of course, this actually depends.  We want the lucrative jobs too.  I agree that such sexually segregated perks whith the male perk clearly holding more business related opportunity perpetuates the glass ceiling.