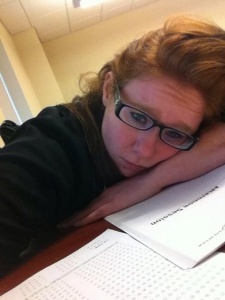 I keep getting asked for advice from fellow classmates now facing bar prep. One of the things I often get asked about is the dreaded "wall". People will swear to you that you are doomed to hit it. They tell me about how their friend's brother's friend during law school hit the wall and then failed the exam. There's never any details given about the wall. There's never any first hand accounts of the wall. So part of you starts to question this concept. But as bar prep goes on, people will tell you when you have a bad day that you are at the wall. And you're going to believe them.

Until you read this:

The wall is a lie.

Ok, well, maybe not complete lie but it is not this horrific event that everyone makes it out to sound like and you are not doomed.

Because you hit the wall everyday of bar prep.

The "wall" is your own fears.

Everyday you are going to be forced to wake up and face those fears. And these can be common bar prep fears like "Do I know enough to pass?" "Can I do this?" Or these can be unique fears like I had which was "What if I disappoint people? What if I have to walk back into bar prep with people I don't like who will point me out like I now have two heads?"

So, here's how you deal with the wall. You need to ask yourself a very important question every day:

Am I going to let my fears keep me in bed hiding from life or am I going to get up and deal with my fears when they rear their ugly heads?

Any day where you feel like you can't get up and you can't drag yourself to class to watch another droning four hour lecture on archaic law but you still do it, that day is a major success and you have broken down another wall.

But the best way to break down the wall is to admit to what scares you. Every time you admit to something, like that you are afraid of defaulting on your loans, you take away the power the fear has over you. Admit it to friends, to loved ones, to total strangers. Keep talking out those fears until they stop seeming so scary. It's something I wish I had done sooner during my bar prep because those fears are more distracting than Facebook. Often you find yourself not concentrating on studying but rather frozen by panic induced by thoughts of what scares you. Start telling people your fears and you will break down walls.

Hope is what will make those walls go from six foot thick New York subway system cement walls, to hedges with poison ivy and sharp branches, to the stupid rope wall from gym class. If you've done your work, that rope wall is nothing because your knowledge is the tool you need to defeat that stupid rope wall; it's essentially your Swiss Army knife. Use that knife, practice more questions, and put your faith in knowing that you've done all you can. Carve out your own success. The ropes will fall to the side and you will be one step closer to that bar score you've been working so hard for.

So, next time someone tries to scare the bejeezes out of you by talking about the wall, hold your head up, and puff out your chest. Let that guy know that today's wall was already defeated because you got out of bed and you've choosen to keep moving forward. Tell that guy that any day you try your best during bar prep and you do your work when it would be much easier to run and hide is another day where you just blew that wall to smithereens.

Walls are for those who want an excuse to fail. Don't give yourself that excuse. Get up and keep fighting.