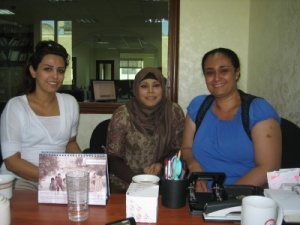 For my first interview in Jordan I decided to hunt down a local grassroots public service law office. I found what I was looking for with Tamkeen for Legal Aid and Human Rights.

Making the interview actually happen was easier said than done; the Director, Ms. Linda Alkalash, was more than gracious in setting up a time for me to stop by the office; the difficulty was caused by me being a clueless foreigner. Google maps is near useless in Jordan, so I just had to jump in a taxi and fumble my way through an explanation of my destination.

When I finally made it to my destination, sweaty and late, I walked into an office that had the same kind of atmosphere as many small legal and social work offices I have been in. The staff was overwhelmingly female, typing and shuffling case files, answering the phones, and surreptitiously checking facebook. The only differences were little things, like about half the lawyers wearing the hijab, and the fact that I kept being offered tea.

First I sat down with Ms. Alkalkash to learn about her organization’s work. Interestingly, Linda’s background is neither Jordanian nor legal; she is of Palestinian decent, born and raised in Egypt, where she graduated from Cairo University College of Archeology. After graduating she married her Jordanian husband and established a life in Jordan. Linda told me that she founded Tamkeen in 2007 with the objective of directly helping a specific class people she had identified as vulnerable: migrant workers in Jordan.

The security and growing economy in Jordan are a draw to both refugees from neighboring war-torn countries, and laborers from poorer countries. There is no way to get a completely accurate number of the migrant laborers in Jordan, but the Ministry of Labor estimated the number to be about 600,000 in May of 2011, with about half of them unregistered. About 70% of these workers are Egyptian laborers recruited to work in factories or different labor industries. The rest come mainly from Sri Lanka, India, Bangladesh, the Philippines, and Indonesia.

According to Linda, the majority of their clients are not general laborers but a second class of migrant workers: female domestic workers who contract to leave their home country and live with their Jordanian employers for a specific number of years, cooking and cleaning and watching their employers’ children. These domestics may face physical abuse, withholding of their passports so they cannot escape, withheld wages, and forcible isolation.

Linda: In 2011 we have had 680 complaints by migrant workers; 570 are women. In Jordan, the majority of migrant workers are from Egypt, all of them men; but they can solve some of their problems. But for the domestic workers it is more difficult, because they are women, they are strangers, they live in isolation.

According to Linda, the establishment of a legal aid organization to help poor foreign women was at first regarded with confusion by both the legal community and society at large:

Linda: Legal aid in Jordan is different…lawyering is commercial, it is a business, it is very difficult to convince lawyers to work on this issue. We have to believe in this issue, in the rights of migrant workers, or human rights in general, to achieve anything. For example, at Tamkeen we work for migrant workers through strategic litigation, through advocacy, with the end of enhancing their rights, not for individuals, but for all of them.

Migrant workers in Jordan, they are low-educated, and they are working in certain jobs like domestic workers or workers in factories, and the attitude of the community is very…the employers think usually that there are no rights for them.

When the maid takes the “Madame” to court…when the domestic worker has a lawyer, it is very strange [for the employer].

Linda did indicate that there had been changes in the atmosphere since Tamkeen’s founding, though. Tamkeen’s efforts to continuously offer training on migrant rights to governmental and non-governmental employees has led to them receiving case referrals from police and social service professionals, as well as leading to a change in attitude from their client’s employers:

Linda: For example, in 2007, when we called the employer to get the passport for the domestic worker…it was very difficult. Now it is easier…they are afraid. They are only afraid; it is difficult to change attitudes. They don’t want to protect the migrant worker’s rights, but they are afraid. Maybe after some years, or many years, I think it will change.

After speaking with Linda, I sat down and drank tea and chatted with a few of the lawyers in the office. Each of the young women was Jordanian, and a graduate of the Jordan University College of Law. Noor had her own practice, but decided to work with Tamkeen for a few months because it was one of the few places she could find work in human rights to broaden her resume. Mai learned about Tamkeen while attending their workshops. Hanan was drawn to legal aid work because it is one of the few specialized areas of law in Jordan, which both made it easier on her starting out as a lawyer, and allowed her to expand her horizons with her connections to people working in international NGOs.

First I asked what their daily work consisted of:

Hanan: [W]e take the complaint from the migrant worker, we write it in a special paper, we file it in the computer. We have here in Tamkeen from one to five complaints every day. We document them in the computer, and we give every lawyer a [case]…. This is besides the old complaints we have taken from 2009 until now. There are some cases we filed in the courts, like salary or captive passports, or compensation cases for damages for the domestic worker or migrant worker, and [they are] still in the court. You know, here in Jordan, the cases have a long term.

The lawyers have to do a lot of traveling: to court, to the police station, to their client’s embassy; a lot of time spent driving in crowded Amman to track down the threads of their clients’ often tangled stories. Some of those stories are pretty terrible:

Hanan: I took a case, I think in 2011, an Indonesian girl. She came to the office after a new beating. They beat her and she came to me. Her hair, here, was pulled out.

I filed a case in the court. The sponsor was a lawyer, and his wife was working as a teacher, teaching students about Islamic [values]. He told me: “Never my wife did this to her.” I told him, “Yes, she did.”

I filed two cases, one case for beating, one case for salary. I did not win by judge, I won because the sponsor told me, “I give up.” I told him, “Give me the passport, give me the salary, and give me money because you are beating her.” I got some good money for her and she left; we sent the money for her to Indonesia.

Do the cases often settle?

Noor: Yes! They are afraid [for their] reputation.

Hanan: He doesn’t want to have to go back and forth from the court, and blah, blah, blah. It is a very noisy matter for them, they just say, “What do you want, and let me finish.”

What other kinds of problems do you see?

Do these women have families?

Hanan: All of these women, they are single; because we have in our law she should come alone, without her husband and her babies. She can’t bring her babies.

Mai: The man can bring his family. But the women from Sri Lanka and Indonesia [they] can’t. All of them, [if] you ask them, they have kids in their country and they left them, and maybe they come here and stay for ten years.

Why do they come here?

Noor: Because they want to buy land and make a home. That’s why they come.

The Future of Tamkeen

Linda Alkalash has big goals for Tamkeen in the future. She and others want to not only work on individual cases, but initiate sweeping and self-perpetuating change that will permanently alter the status of migrant workers in Jordan:

However, her office faces difficulties from several directions. The current crisis? A funding one. Tamkeen recently transferred from being a not-for-profit organization to being an association, and now has to request approval from the Jordanian government in order to receive international funding. Unfortunately, their request was denied, which from 2008 until now had not happened to a similar association. They aren’t yet sure what the source of the problem is, but Tamkeen will be appealing the funding issue through litigation and advocacy, while keeping their doors open to their clients. For more information on their work, or to read their reports on migrant labor in Jordan, go to http://www.tamkeen-jo.org/index.htm.

(Tamkeen is always looking for talented qualified individuals to broaden its human resource base. If you are interested, please send your CV to info@tamkeen-jo.org with the subject "JOB APPLICANT"‬)