“Different Leadership Styles” or Gender Bias: How Do You Get Behind Euphemisms?

By lawblogger • November 21, 2007•Sexism, Sexual Harassment, and Other Forms of Discrimination 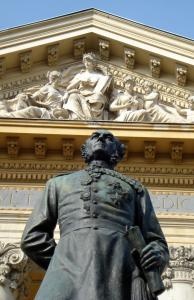 After only 17 months in her post, Susan Prager, the first female president of Occidental College, resigned. Gender bias is not cited as the cause of her departure by any of the parties involved. Instead, neutral words that say very little purport to explain the resignation. Prager said she did not have "a strong compatibility" with the board chairman and senior administrators. Dennis Collins, the board chairman, expressed regrets that he and Dean Prager "were not able to work together as [they] envisioned."

Prager's position at Occidental was not her first foray into leadership: Prager was the dean of UCLA Law School for 16 years and the second woman to serve as president of the Association of American Law Schools. Given these credentials, I couldn't help but wonder when I read about Prager's sudden resignation whether her gender had something to do with her lack of "compatibility" with the leadership at Occidental, especially given the less opaque commentary made by other members of the Occidental community. Professor Derek Shearer explained that Prager "proved to be not the strong, dynamic leader that the school both wanted and needed" and that Prager, as paraphrased by the L.A. Times, "seemed to have a more deliberative administrative style instead of the more aggressive, entrepreneurial one trustees wanted." Shearer concluded: "I would say it was a mismatch of styles of leadership."

What is he getting at? The job of a university president, or at least the part you always hear about, is primarily to raise money. Under Prager's leadership, Occidental received $25.7 million in 2006-2007, a record gift amount. Certainly a leadership style this successful "matches" with trustee expectations. What else do university presidents do? Since universities work to serve students, one can assume student relations are part of the job. Did Prager need to be more "aggressive" in that area? The president of student government at Occidental states that, as summarized by the L.A. Times, Prager "showed strong concern for the school's and students' well-being," though perhaps was "slow in adjusting" to her new role.

Am I the only one who smells a rat? It's probably true that Prager didn't get along with the upper leadership at Occidental. Perhaps she, like many men, lacks certain skills that make a good leader. Perhaps nothing about her resignation relates to her gender. And yet... The criticisms leveled at her stink of something below the surface. She isn't aggressive enough? She didn't have a deliberative administrative style? She wasn't strong or dynamic but instead showed strong concern for the well-being of others? These comments, made by men about a woman in a high leadership position, sound like a laundry list for the too-often trumpeted differences between men and women. Men are strong and decisive. Women build bridges of empathy. Men get things done. Women care more about the process. But, in this case, Prager was getting things done. Her style, though perhaps not male enough for the leaders at Occidental, made for a record fundraising year. What was really the problem here?Even the praise directed at Prager has a gendered feel: board chair Dennis Collins notes that the school is "delighted that Susan will be maintaining her association with Occidental [when she returns in 2009 to a tenured professorship]," lauding her "enviable reputation as an inspiring teacher and serious scholar." Women have long been good teachers; it's too bad they still face an uphill battle to be recognized as good leaders without adopting "traditional" (aka male) leadership attributes.

Another interesting point worth mentioning involves translation. I read this story and came away thinking that Prager was forced to quit her job because Occidental trustees did not respond well to a leader with "feminine" qualities, who they therefore perceived as weak and indecisive. A news blog came away with an entirely different impression after reading the same story, summarizing with the following headline: "Occidental College President Didn't Like the Job" I guess there are two sides to every story.

My mentor once told me that people are hired for their qualifications and fired on personal chemistry. it sounds like this was the case here.
Read more on my site theglasshammer.com
http://www.theglasshammer.com/news/2007/11/08/can-women-win-and-do-we-even-want-to/
happy thanksgiving

nickig:  you have a great website!  You should cross-post here at Ms. JD whenever you can and when it lines up with the focus here.

that she was able to successfully lead UCLA law without any fatal interpersonal problems but suddenly has chemistry issues as the first female president of Occidental?  Since she was the first woman to hold that position, it stands to reason that the upper management was used to a man in the role.  I agree with you, nickig, that it's probably not insidious gender bias at work, but isn't it possible (or even probable) that subconscious gender bias influenced the outcome, especially because Ms. Prager was the first woman to fill the role and met such a poorly explained (unless something below the surface was going on) end?