By Maria T. Schneider • June 11, 2007•Sexism, Sexual Harassment, and Other Forms of Discrimination 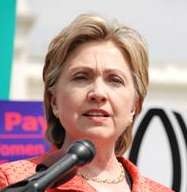 "So, that's it... you hate men." Andrew stared down the table at me, challenging me with his words, his facial expression and his hand gesture.

Almost thirty years after the second wave of the feminist movement, women have made tremendous strides, infiltrating the workforce and, in many cases, fighting their way to the top. But still there remains the unrelenting and unshakable glass ceiling. The legal profession is no different. Though women represent approximately half of law school graduates, the New York Times recently reported that only seventeen percent of partners in large law firms are women. There are many factors that contribute to this statistic, but whatever the reason, as a woman entering the legal profession I am ever cognizant of my contemporaries and my predecessors.

My undergraduate thesis work explored the role of women in leadership positions, more specifically in government, and the way(s) in which they make decisions of war and peace. At the time of my research, the idea of Hillary Clinton running for President was only a suggestion. Now, as her candidacy has become a reality, more questions arise: how will this "feminist" candidate act if she becomes a "feminist" President? Senator Clinton's record, her stance on issues and her own ideas and goals are not enough to recommend her for the Presidency alone--she must overcome the barrier of gender. As Anna Quindlen said in her recent Newsweek article "The Brand New and Same Old" "...every time Clinton is described as calculating or ambitious, you realize that such words are never used for male politicians because for them both traits are assumed--and accepted. ... In the first Republican presidential debate, ...the contenders [were asked] how they would feel about having Bill Clinton back in the White House. In a single sentence...[the] ... Democratic front runner [turned] into the Little Woman, a mere adjunct to her husband."

This problem that faces Senator Clinton is the same problem that faces every woman. To be motivated enough to seek partner is to be ambitious; to be diligent and determined enough to plan your career, is to be calculating. Women everywhere are held back by the expectations society has for them, the expectations men in their lives have for them and by the expectations they have for themselves. To be a feminist is to be a career woman, someone driven to reach the top, someone who thinks women are disadvantaged in every interaction of every day life. To be a feminist is to be a man-hater. I beg to differ. To be a feminist is to be concerned with the equal rights of all individuals. It is to want equal pay, equal opportunity and equal treatment for everyone, not just females. In the words of Susan B. Anthony: "Men, their rights, and nothing more; women, their rights, and nothing less."

The reality I feel I face as I enter the legal profession is that glass ceiling. In it I see reflected the images of so many, like Andrew, who misunderstand the goals and ideals of feminism, feel threatened or confused by a woman in a position of power, hold certain expectations or relegate women to defined roles. But in the glass I also see reflected images of myself. I am afraid I'll be threatened or denied access by those in powerful positions; afraid I'll be held back or overlooked for a job or a placement I could handle with finesse. I am afraid that my own expectations and desires in regard to building a home and raising a family will inhibit the expectations and desires I have for my career, and vice versa. I enter the legal profession increasingly and eternally aware of these ideals and expectations and yet, equal to the task. I am eager to champion my cause and my gender.

You've really hit the nail on the head!

I think that if you asked ten women who described themselves as feminist to tell you what they mean by that, you would get ten different answers.  This one term is used to describe several different philosophies (wikipedia lists six, and there are probably hundreds of other variants without official names).  Feminism can be such a divisive term, and people use it to mean that women should get as far as they can regardless of personal happiness for the "cause," or to mean that women should have choices to either stay home OR work, or even to mean that the whole world needs to be reprogramed to have "feminist" values.  I hate that if I say I'm a feminist, people are going to interpret that through whatever their personal definition is, regardless of what I mean when I say it.  I personally think it has become a very confusing term, almost too ambiguous to be useful.  I now just say "I believe that women should have equal rights and an equal opportunity to succeed in our society."  No one seems to find that objectionable, but when I say I'm a feminist, there are plenty of people who find that objectionable, even though I mean the exact same thing in both instances.
Also, just because Hilary Clinton is a woman, I don't think it's a logical next step to say that she would be a "feminist" president (whatever that would even mean).  For better or worse, I doubt her gender would influence her decisions one way or the other.  I think that to get where she is, she has had to change herself to fit the political norm (which is defined in very male terms since pretty much all elected positions are held by men).  I really can't think of one thing that distinguishes her from the male candidates because of her gender, except that she doesn't have a penis.  As a final comment, I think it's funny that Hilary is called a lesbian half the time, unless it's convenient to suggest that electing her will mean that her husband will be back in the White House.  Then, she's a demure and loving wife who would clearly have her husband whispering in her ear for every major decision.  It's completely ridiculous.

<div left”>Hillary Clinton may not be Gloria Steinem, but I think in many ways she can't help but be a feminist President - which makes me very excited.</div><div left”><br class=“khtml-block-placeholder” ></div><div left”>Hillary's taken up some serious feminist issues in her past, and obviously she's not going to be able to play them up on her platform right now, but I think they will resurface.  She has already changed and challenged some of the premises of discussion in the political debates and the male-centered-ness of questions, etc.</div><div left”><br class=“khtml-block-placeholder” ></div><div left”>For another thing, the pronoun 'he' will not automatically be applied to the Presidency anymore.  It's sounds small, and stupid, but it's just one happy little chip in the behemoth that is the white male American presidential image.  I think the symbolism of finally having a female president (or a Black one) should not be underestimated.  It's not going to change everything, it will of course create a backlash, but it's a step that's got to happen, so why not as soon as possible?</div>