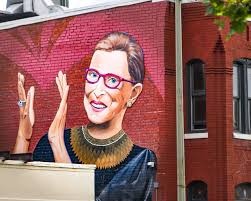 Supreme Court Justice Ruth Bader Ginsburg, affectionately nicknamed the Notorious RBG, passed away on Friday, September 18, at the age of eighty-seven. The second woman to serve on the Supreme Court, and first Jewish female justice, Justice Ginsburg is remembered fondly for her continued effort to advance rights through her progressive court opinions, and even steamier dissents, as well as her own work as a lawyer and professor in serving as a champion of equality between the sexes.  When asked for one word to describe Justice Ginsburg, Ms. JD community members used words like “inspirational,” “iconic,” “trailblazer,” and “visionary.” In celebrating her accomplishments, it is important to remember that RBG was not just a role model but a changemaker. One of Justice Ginsburg’s most famous quotes, captures her thoughts on female equality in the legal profession: "When I'm sometimes asked 'When will there be enough [women on the Supreme Court]?' and I say 'When there are nine,' people are shocked. But there'd been nine men, and nobody's ever raised a question about that."

As a non-profit dedicated to the advancement of women in the legal profession, it is incumbent on organizations like Ms. JD to carry on the work of Justice Ginsburg. Through opportunities like our upcoming Law Student Leadership Academy, continuing conferences like LaddHer Up, and programming involving the youngest future members of our profession like Determined to Rise, I can only hope that there are not just one—but nine—future female changemakers within our community.