Round 2 - Navigating Law School with Baby #2 on the Way 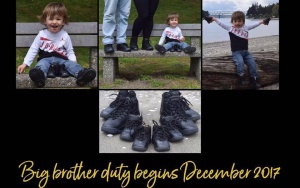 My husband and I just announced that our second baby boy is due in a December of 2017. What better way to immerse myself in the topic of this blog, right?! I'm kidding, obviously, but it will be beneficial because I will be blogging through December about the topic of being a parent in law school.

First things first, we planned this, just as we planned our first (although our first was planned to arrive during summer break, which is significantly longer than winter break). So, what does December look like for a law student? Seattle University School of Law is on the semester system, like most law schools (our neighbor, the University of Washington School of Law, is on the quarter system). Typically, classes end the week after Thanksgiving and finals span until mid-December (two full weeks).  This year, finals end December 15. Classes start the second week of January. And, we all know how crazy the holidays are.

I'm due December 10. Now, I've done this once before. Our first son was born 12 days after finals were completed, my first full year of law school. And, he was 12 days early.

I originally had planned to graduate in December, but after researching and talking to people in the field, I felt that law school would provide me with the flexibility that I needed to have another baby and still graduate within reasonable amount of time and close to my anticipated graduation date. I was fortunate enough to have a pretty uneventful pregnancy the first time, and so far it has been the same. I am 13 weeks along with this pregnancy. But, realistically, any number of things could happen that would prevent me from starting classes the second week of January. Postpartum issues arise as well, which I did experience during my first pregnancy.

Some people think I am absolutely crazy doing this a second time in law school. I embrace the challenge.

My plan: complete 12 of 15 credits remaining in the Fall Semester. All but one of the classes I have registered for have a paper as the "final exam" or no exam at all (an externship could come into play here too). I may still drop that one class with a final exam and just leave that for the Spring. With 3 credits in the Spring Semester, I hope to find a baby sitter for the 3 hours per week I will be in class (remember I commute two-hours to campus, by bus and ferry). We'll see if my plan works out!