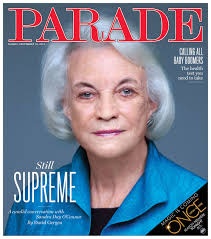 With the news coming last week that Sandra Day O'Connor is stepping away from public life, much has been written about her brilliant legal mind, her momentous career on the Supreme Court, and her robust life following retirement from the Court, including founding of the group, iCivics, which promotes civic education in schools through free, educational online games.

Justice Ruth Bader Ginsberg, known affectionately to her fans as "Notorious RBG" has two children that she raised alongside her legal career, but the next two women named to the Supreme Court were groundbreaking and lauded choices of President Obama, who are also childless women, raising the speculation about choices women must make to achieve heights in their chosen careers. To that end, many biographies of Justice O'Connor omit what some of us consider the most inspirational dash on her resume - the one where she left the law.

Justice O'Connor left the law for five years to raise her young children from 1960 to 1965. Her hiatus from private practice occurred after the birth of second son. She subsequenty relaunched her career in 1965 by joining the Attorney General's office.

In an interview recorded in Back on the Career Track (authors, Carol Cohen and Vivian Rabin), O'Connor conceded her worries when embarking on a lengthy sabbatical from the law:

"I was really worried that I would be unemployable, but I had to take care of those children. To keep my foot in the door, I realized I had to do something in the field even it it didn't pay. I wrote and graded bar exams for the state of Arizona, which kept me current in the law. I set up a lawyer referral plan for the local bar association, which was a good way to get acquainted with other lawyers. I took a position on the county planning and zoning board and agreed to be a juvenile court referee. I also accepted some small bankruptcy appointments."

May we see more like her in the coming years.