SF: Read all about it! 3 Must-read books about The City. 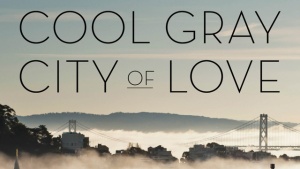 Before I moved to SF, I lived in Berlin, Germany for a study-abroad semester and traveled throughout Europe. My experiences as an international traveler (10/10 would do again) strongly influenced and informed the way that I wanted to approach SF as a new home, a new city, and a new adventure. Though SF was not entirely new -- I grew up in the South Bay, so I did the SF weekend trips -- I never felt like it was my city. I'm working to change that, and through my blog posts I am going to share with you the different approaches I've taken. Today (and probably for many more) I am going to talk about great books I've read about the city. These are undoubtedly personal selections out of a universe of books about SF. If you have other suggestions, please say so! I would love to get some more recommendations.

This is a bit of a memoir-history-essay (a la Montaigne) kind of book. Kamiya has been a long time resident of the city and tells the city's history in a series of personal anecdotes. I especially love the preface where Kamiya explains that a lot of his material comes from his own crazy quest to explore every street in San Francisco. He literally buys a giant map and highlights all the routes he has taken! This got me right in the heart because my experience traveling Europe was that walking around a city is how you really get to know it. (The French have a word for it-- flâner-- which means to wander aimlessly, without a purpose, for the pleasure of walking. There is also a small essay book on that called The Flâneur by Edmund Burke that I've been meaning to read but haven't yet.)

As a result, this collection of stories is not your typical serving of tourist sights and generic experiences. Sometimes it gets super nostalgic and sometimes the endings of the essays feels a little rushed. However, Kamiya is an excellent writer and this book leaves little doubt of that. I learned about 30% of my SF trivia from this book. But there are also perfect little gems in there, and it's a great introduction to the 7x7 city of SF.  A little dreamy, a little hyper, whole lot of personality.

If you like the law (which I hope you do) and you're vaguely interested in the 9th circuit then this book is totally for you. This is where 100% of my legal SF trivia comes from, and also 100% of my knowledge about the history of street names around Civic Center. McAllister Street, where UC Hastings sits? Named after an awesomely cool judge.

The book starts with San Francisco and the first court cases heard here, which were admiralty cases. It then does a fantastic job of tracing the city's cultural growth as reflected in the cases heard before the courts and the decisions handed down by the judges. My bookmark is parked at the Chinese Exclusion Act, and will probably stay there until dead week brings back that wonderfully refreshing impulse to do anything but outline. But speaking of judges, this book is also amazing because of the way it brings judges from years past to life. You really get a sense of their personalities and their different, very personal, approaches to the law.

I have been told every chamber in Northern California has a copy of this book.

3. Season of the Witch, by David Talbot.

This is another historical book, written like a novel. It focuses mainly on the crazy, turbulent years surrounding the famed Summer of Love and does a good job of peeling back the layers of smoke. (pun intended). When I say crazy, I really mean it. For example:

Did you know that Jim Jones, the leader of The People's Temple (of Kool-Aid fame), used to rub elbows with Harvey Milk and other big-name politicians, and had a major role in San Francisco elections? Also, that SF has a lawyer family with dynastic political power--the Hallinans? The book starts with the rise of the Hallinans, and the family reappears throughout, notably as DA during the Patty Hearst case.

Did you know that it used to be illegal for kids to run away, or for anyone to help them stay runaways? The law said that runaways had to be reported to the police and sent back to their homes, no matter what kind of situation was waiting for them there. Combined with the siren song of the Summer of Love, San Francisco found itself with an epidemic of runaways. Enter the Huckleberry House, the first runaway shelter in the nation -- still operating today.

This post ended up being much much longer than I intended, but I hope that my enthusiasm has inspired you to pick up one of these books! If you read them (or have read them) please let me know what you thought. As always, suggestions for posts are always welcome too.