She Leads: Interview with Edith Perez - Keynote Speaker at ABA WILL Academy 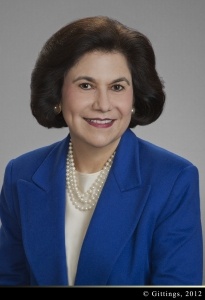 From the moment Mary Cranston introduced Edith Perez as the keynote speaker for the ABA Women In Law Leadership Academy (WILL), I felt a connection to her.  It wasn’t just that she spent 26 years of her career at the law firm that I also call home; it wasn’t just that, like me, she was petite, or that we both came from rural beginnings. There was something about her that drew you in. Maybe it was that, despite being a petite woman, she commanded a room full of hundreds. Maybe it was that she projected an optimism that was contagious. Maybe it was just that I felt a kindred spirit in her. Whatever it was, I knew that I had to share her with the Ms. JD Community.

After her speech, Perez was surrounded by women; some looking for advice about success in the law, some hoping for her advice about how to get on a corporate board, others just wanting to shake the hand and thank a woman who had inspired them that day. I watched as Edith patiently spoke with each woman, offering her advice, laughing with her, encouraging her in her own path. I was prepared to introduce myself, ask her if I could follow up with her through Latham, and move on to allow others to speak with her. Perez had other plans.  We talked about my current work at Latham, the partners with whom we were mutually familiar and her own daughters.  You felt as though Perez could speed mentor anyone! So, at the risk of not doing her justice, I offer some of her advice here so that others might enjoy the force that is Edith Perez.

Perez grew up about an hour North of Sacramento, CA, the daughter of an immigrant family.  She attended UC Davis because “It was the most affordable and best school nearby home.”  She took a year off between college and law school to work as a probation officer.  Perez says she went to law school because “I wanted to save the world.” She attended BOALT Hall at Berkeley “because it was the most affordable and best law school nearby home.” At this point in the conversation she stops and laughs, “What a difference a generation makes – my eldest daughter will graduate from Brown University this year and my youngest daughter will attend Vassar this fall.  I have recommended that they choose schools based on criteria that are a little different than I did!”

Perez went to Berkeley with every intention of going into public interest law but two professors encouraged her to work in the private sector first.  “Herma Hill Kay and Jan Vetter – a liberal professor and a conservative professor – told me that I needed training and that I would get that in the private sector.  So, I went to Latham & Watkins with absolutely no intention of staying there more than two years – 26 years later, I retired!”  Perez says she stayed at Latham because she found her work intellectually stimulating and found that she was able to do more public interest work in private practice than she expected. Between fundraising for charities, the great pro bono opportunities that are a cornerstone of Latham’s legal work, and her intellectually stimulating transactional practice, says Perez, “I was challenged and fulfilled!”

As an example of the public interest work she was able to do while at Latham, Perez described what it was like to be President of  the LA Police Commission while a full time partner at Latham. Perez says chairing the Police Commission (after the Rodney King incident) was one of the most challenging situations she has ever faced: “I gravitate to positions with big challenges. In fact, I take positions with big challenges because they allow me to focus and expand my skills. It was the fact that I became a commissioner after the Rodney King incident that made the position interesting. I like the idea of being a change agent!”

Given her very active history, I’m sure you won’t be surprised to hear that Perez didn’t leave Latham & Watkins for an easy retirement! Today, she serves on the Board of Directors of Con-Way Inc. Perez says she set the goal of being on a Board of Directors and then started asking her friends for advice. Two years later, she became a Director at Con-Way. It’s just another example of how Perez saw a challenge and conquered it!

Perez’s advice to young lawyers?  There’s a lot of it!  Here’s a few of the best nuggets from our conversation:

1. Responsibility is an incredible feeling. Early in my career, I loved being an associate on international deals where the partners relied heavily on me and TRUSTED me to get the job done.

2. To get anywhere worth going, you have to take calculated risks.  You’re going to be scared. That’s human!  Be aware that women tend to have more fears because we are often new to the levels of influence that you will achieve as a top woman.  That fear and those risks will make you grow and help you achieve!

3. To get responsibility, either know what you’re talking about or learn it.  You have to dig into the substance.  Really take ownership of things and expect that it’s going to be your job to know it. That’s how people get comfortable giving you responsibility.

4. Learn to be an effective listener.  You have to be able to communicate in a meaningful way.  WORK ON IT!

5. Continually ask for guidance. I am completely shameless about this. I will call ANYBODY and I’ve gotten more assertive about meeting people over time.  None of us get anywhere without the help of someone else.  Don’t be afraid to ask!

7. Don’t forget, a working life does not mean that you will be happy 24/7! There’s going to be rough spots and that’s when you really have to believe and imagine you’ll succeed.

Phew!  I feel inspired just writing this post!  What do you think?  How can you see yourself applying Perez’s advice?

Great article and closing points - thanks for sharing!

Thanks Kellie!  I’m glad you enjoyed the piece.  It was a blast to write.