Skirting the Ceiling: Women’s Initiatives in BigLaw Make Work-Life Balance Better for Everyone 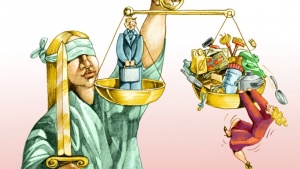 Throughout 1L year the pressure was on to make grades that could score you a spot at a BigLaw job. This pressure seems to weigh down on everyone even though only a small percentage of the 1L class will be considered qualified to work at and will actually work at a BigLaw job. As 2L year approached, my friends and I entered the OCI process and submitted ourselves to a roller coaster of emotions. Personally, I applied to jobs and came into OCI incredibly skeptical and a little awestruck. I was suspicious that the benefits of working in BigLaw actually outweighed the sacrifices such work demanded and amazed that any of these firms were interested in hiring me when I considered some of my friends and classmates to be substantially more qualified, at least by the law school bubble’s standards.

In preparation for OCI, career counselors and attorneys recommend that 2Ls not ask about a firm’s commitment to work-life balance as it may come across as if you aren’t truly willing to commit to the job. Often this comes with a hurried “That is a good question to ask though,” and a suggestion to ask a 3L who worked there last year or an alumnus who is currently working at the firm. Practically speaking, they’re right, of course. Other law students will typically agree but for another reason—if you ask about the firm’s culture or work-life balance, you should expect a firm to lie about the answer.

Throughout the OCI process, I tried to pick up on little clues that would give insight as to what working at the firm would actually be like. Sometimes that required reading into what the attorneys talked about and how they interacted with one another and law students. Other times the attorneys themselves would hint at things they thought were important or would just bring up the firm’s life-balance outright. The few forthright attorneys often spoke about their firm’s culture in comparison to another firm they had worked for where conditions were purportedly much worse. One attorney specifically mentioned to me that she was especially proud of the practices that the firm had adopted that enabled the firm to retain such a high percentage of female associates.

In the months since OCI wrapped up, this was the comment on the retention rates of female attorneys that got me thinking. Why stress practices that retain women? When I reviewed the National Association of Women in Law’s 2017 edition of their Survey on Promotion and Retention of Women in Law Firms, it became obvious as the following findings jumped out at me:

To put it simply, the low retention rate of women in BigLaw is really, really real, and firms that adopt initiatives that incorporate parental leave, telecommuting, and flexible hours, among other practices, are far more likely to retain women. Something I’ve been wondering about is why? Why are more women more likely to leave a job if the conditions aren’t optimal? Why are men more likely to stay and maintain the status quo rather than push for something better? While we may never have a more concrete answer to this question, it’s interesting to think about how gender norms may influence male and female attorneys’ decisions. It may be that women in law feel more pressured to physically spend more time with a family if they choose to have one, while men may feel more pressured to fulfill the role of the provider, even if that means staying away from the family. I chose this cartoon because it depicts the frustration many women in law feel but also because in doing so it demonstrates how we often overlook men who feel that are in the same position.

Hey!  I can totally relate to your questions.  Here’s a relevant recent report that speaks to some similarities and differences re leaving women and men:  https://www.mckinsey.com/global-themes/gender-equality/women-in-the-workplace-2017 I also was asking some of the same questions about what makes women leave law firms:  https://ms-jd.org/blog/article/join-the-conversation-what-if-alienation-is-not-a-universal-feeling Thanks for sharing the NAWL study!