Skirting the Ceiling: Sexual Harassment and the Intern’s Dilemma 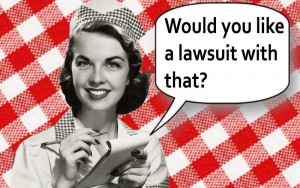 A couple of weeks ago, a friend of mine was asked out on a date by another intern at our office. She awkwardly and politely declined, and we laughed about it a little later because it was so unexpected. My friend asked me if I thought it would be weird at work for the two remaining weeks she had there. I said that I didn't think so, but that if it was, she could always explain to the guy that she just didn't think it was professional to date within the work place. Little did we know that the next two weeks would be full of inappropriate, sexual jokes at her expense and unwanted touching.

While our fellow intern never crossed the line as to act outright offensively, he definitely started engaging in behaviors considered inappropriate for the workplace. Some of the behavior may have been acceptable if they were dating or close friends, but they weren't. To top it off, it didn't sit well with either of us that he acted this way in front of other interns we didn't know well or hadn't met and in front of the employees we were trying hard to learn from and impress. I'm not sure if either of us said it aloud, but I'm sure both of us thought it-- is this sexual harassment?

My friend wasn't sure what to do to handle the situation. She splitting her summer and would be starting a new job within a week. We talked over what we thought might be the best and most mature courses of action. Should she address it with the guy directly? Should she ask our career counselors on campus for advice? Should she bring it up to our intern supervisor?

The issue seemed to loom larger the more we thought about it. What if the issue was brought up with our super visor and the other intern was fired? What would the intern do if he lost his job because she sought help? What if she did bring it up to our supervisor and he thought it wasn't a big deal? Would she be seen at the intern who couldn't take a joke or as the one who overreacted?

Could this backfire on her somehow?

Many legal interns are considered unpaid volunteers, and many employers go out of their way to make interns acutely aware of how un-employed they are. With these internships come phenomenal opportunities to learn and gain hands-on experience paired with a lack of protection against sexual harassment. Many firms and agencies may not have policies for non-employees pertaining to non-fraternization or sexual harassment. Additionally, Title VII on the federal level and most state level protections do not apply to interns. The bottom line? There are almost no legal protections from sexual harassment or legal causes of action for the thousands of unpaid interns in America.

Males are 100% as capable of being harassed in the workplaces as females. At its core, sexual harassment is not an inherently gendered issue, but, statistically speaking, it is more of a women's issue. Every year women file roughly 75% of the sexual harassment claims reported to the EEOC. While this number may not surprise you, what may is that an estimated 77% of unpaid interns are women, according to Intern Bridge, Inc.. Meaning, women are not only more likely to be harassed, they are also more likely to be unprotected by state and federal law from harassment in the workplace.

To date, Congress' attempts to resolve this issue on a federal level, to close what is known as a "loophole" in Title VII, have stalled. The House passed a bill designed to protect unpaid interns from sexual harassment in 2016, but according to the EEOC, the bill is still working its way through the Senate's committees.

Let's consider some key facts about sexual harassment identified by the EEOC:

So what should you do if you feel like you're being sexually harassed in the workplace? First, identify what type of harassment you feel that you are experiencing. Harassment can range from seemingly subtle, grey-area comments to black-and-white offensive conduct. Being able to identify what action has made you uncomfortable and being able to articulate how it makes you feel will help with whatever next step you decide to take. Next, consider taking the following actions, as recommended by Psychology Today:

You deserve to be able to feel comfortable and thrive in your work environment. Standing up to sexual harassment can be scary, but trust me, you're worth it.