New Tactics in the Mommy Wars 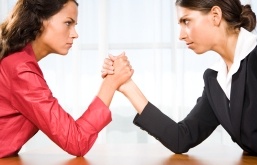 I've been fascinated on a sociological and professional level with the issue of the so-called "Mommy Wars" for a long while.  I've written about the guilt of the working moms that are fighting the Mommy Wars here.  The questions of the "Opt Out Revolution" have been well documented.  However, the recent post on this site by jlwallace is the inspiration for this post.  I'd like to talk about the current tactic by working mothers to try to make stay at home moms feel guilty about wasted education or setting bad examples for their daughters -- a phenomenon that bothers me more than a little bit.

It is my impression that the Mommy Wars have been traditionally fought on a predictable battlefield where the Stay At Home Moms (SAHMs) fault the Working Moms (WMs) for being selfish, bad mothers and for not sacrificing enough for their families and the WMs fault the SAHMs for not much more than being lazy and maybe look down at the SAHMs as inferior women that aren't able to manage family and career.  On the guilt scale, I've always thought that this was one weapon in the arsenal of the SAHMs that was unavailable to the WMs -- considered it a tactical advantage (like night vision is for the US and her allies) that the SAHMs would never share with those fighting on the WM side of the battlefield.  In addition, the weapon of calling into question one's fitness as a mother has also been primarily in the possession of the SAHMs and something only employed by the WMs on a case-by-case basis.   Afterall, what sort of argument would the WMs have that the SAHMs, as a group, weren't good mothers? -- they've dedicated themselves to that job full time and are, the conventional thinking goes, by definition good mothers.

Or, are they?  Not to be undone, the WMs have found a way to use turn things around on the SAHMs and now claim that the SAHM side is selfish one and have found a way to make them feel guilty.  Ah ha, perhaps the war is not as one-sided as some of us thought.  This is how the new tactics (employed by WMs broadly these days) go:

Well, I'm not buying it.  I am no fan of the guilt associated with being a working mom.  (Truthfully, I'm  getting over it as my kids get older.)  I will not, however, resort to the tactics laid out above to "win" the so-called Mommy Wars.  It isn't worth it.  Frankly, it isn't a war worth winning if it means that one side truly has to lose.  I agree with this comment -- let's even the playing field so that the men are in it with us and so that there aren't winners and losers.  Most importantly, can't we just focus our energy on being happy with our own decisions instead of attacking the decisions of others.  I know... easier said than done.

I couldn’t agree with you more about finding an end to the mommy wars and putting a stop to the judgments/guilt trips that go back and forth.
100% on board with not attacking women for their personal/professional decisions.
HOWEVER
While the mommy warriors may be resorting to these tactics for other reasons the fact remains that guilt is a powerful motivator. It’s been working on WMs for generations. And the societal pressure on WMs to feel guilty about their choices is overwhelming.
I don’t think it’s enough to just prohibit this kind of dialog without addressing how we as a community counteract that and incentivise change in the profession (both at the individual and institutional level).
Ms. JD tries to play a role in this by providing encouragement, advice, and positive role models. I think that’s helpful, but I’m not sure it’s as powerful as the guilt you describe.

I’ve also noticed a trope lately of faulting women for making individual decisions that are perceived as bad for womankind. Individual women shouldn’t stay home because it shows that women are only cut out to be moms and don’t want to work. Individual women shouldn’t work part-time because it shows that women are less committed to their careers than men. Individual women shouldn’t admit that pregnancy and caring for young children actually does slow us down because we want to pretend that we can do exactly the same things as men at exactly the same times in our lives.
The comment linked to in the last paragraph of the article, about an even playing field for men and women, was mine. I’m always preaching equality for men in giving them a valid choice to seek work-life balance as an alternative to achieving equality for women by pushing women to constantly work more and work harder. That lifestyle has only worked for men in the past because they typically had stay-at-home spouses who took care of the kids. It does not work when both parents are killing themselves for their jobs. If women are going to make strides at work, men need to make—are are making—strides at home.
In general, though, this whole idea of doing things because they’re better for the gender—I just don’t think people can live their lives that way. I’m a former engineer and I had some guilt about switching from a male-dominated profession to law. I hated to be part of the statistics about women not sticking with science and engineering. But ultimately, except in the most abstract way, I wouldn’t really be helping anyone as an unhappy engineer.

I’m still thinking about this post and wanted to share these recent pieces from Erica Jong and her daughter Molly Jong-Fast. They pretty sqaurely represent both the sides discussed here. Kind of fascinating.

Thanks for posting these links. They are both great and very topical.   I stand by the fact that “guilt” isn’t helpful to anyone.  The key is “choice” and, honesty, many many women don’t have a the so-called “choices” to make that many of us have.
One more thing, while I feel the guilt of being a working mom and certainly felt it even stronger when my children were younger, it didn’t keep me from working, it just damped by happiness. I imagine the same is true for SAHMs—they may feel the guilt associated with a law degree that is not used for more than home-office decoration but it didn’t keep them from making the choices that they thought were right or were otherwise bound to make, it just might keep them up at night with worry, regret or any other variety of emotions that are cutting into their happiness.

Another post that is related to the concepts in the links in Jessie’s comment.  “Super mom syndrome”—a topic for an upcoming post of its own…. stay tuned…