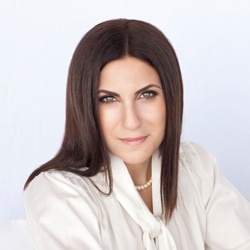 Next week, Ms. JD and Sullivan & Cromwell LLP will host a reception in New York City to celebrate the launch of the Ms. JD Global Education Fund and to help raise funds for its two inaugural scholars, Ugandan law students Joaninne Nanyange and Monica Athieno. Sadly, I will not be able to make the trek to the East Coast to attend what promises to be a wonderful event in honor of a worthy cause. However, when offered the chance to interview the keynote speaker, Gayle Tzemach Lemmon, I jumped at the opportunity. But you’ll have to attend the June 21st event to hear all that Gayle has to say, since this post only begins to scratch the surface.

Gayle currently serves as deputy director of the Council on Foreign Relations’ Women and Foreign Policy program and is the author of The Dressmaker of Khair Khana, a New York Times bestseller. The Dressmaker of Khair Khana recounts the story of Kamila Sidiqi, an Afhagni woman who managed to operate more than one successful business during the Taliban’s rule. At the time she met Kamila, Gayle was in Afghanistan working on a story for The Financial Times. Gayle was instantly taken in by this woman who spoke of starting her third (yes, third) business - a consulting business that teaches Afghans entrepreneurship skills. The Dressmaker of Khair Khana sheds light on women’s efforts to support their families and the power of business in rebuilding war torn societies. The book has been highlighted on National Public Radio and lauded in The Washington Times as showing “the optimism and tenacity of the resilient Afghans along with their aspiration for freedom, combined with hope and the firm belief that the years of bloody conflict will ultimately subside and a stable, civil society will emerge."

But, Gayle is not only a bestselling author, she is also an accomplished journalist. Her article, “The Hillary Doctrine,” appeared in the March 2011 edition of Newsweek. The article details Hillary Clinton’s efforts to bring women and girls into the forefront of foreign policy and global initiatives. In recent years, Gayle’s journalism work has focused on female entrepreneurs in conflict and post-conflict regions. Over the past ten years, she has reported for the ABC News Political Unit and “This Week with George Stephanopoulos,” the Financial Times, New York Times, International Herald Tribune, the Daily Beast, and Christian Science Monitor, Ms. Magazine, Bloomberg, Politico and the HuffingtonPost.

For Gayle, the women on whom she has reported embody the power of entrepreneurship to change lives. Because these women have often been ignored, they have not been viewed as a source of information from which we can learn. However, despite the challenges they face – lack of access to capital, networks, and markets, as well as often non-existent property rights, social disapproval and limitations on mobility – these women have managed to develop innovative ways to support their families even in conflict zones.

What is most inspiring when speaking to Gayle is the admiration that she has for women and their power to make a difference in their communities. According to Gayle, people often aim low when it comes to possibilities for women entrepreneurs, overlooking some of the larger business that women can and do run successfully. Gayle’s work shines light on the myriad possibilities for women to thrive in the global economy on a scale much larger than that envisioned by microfinance initiatives.

Ms. JD is honored to have Gayle share her thoughts and insights on the often unnoticed contributions of female entrepreneurs and the ever-changing prospects for women in the global economy at the Tuesday, June 21st Global Education Fund fundraiser. For those of you lucky enough to live in the New York area, this an event not to be missed! Copies of The Dressmaker of Khair Khana will be available for purchase at the event and Gayle will be there to sign purchased copies. So you can leave the night having given to a great cause and obtained a personalized note from the author!

What an inspiring speaker!  Thanks for sharing more about her.  I know a lot of friends in NYC are really looking forward to seeing her.  I’m sad I’m missing out too!

If anyone has room on their summer reading lists!

Even if you aren’t able to make the event in NYC, you can still order a signed copy of Gayle’s book.  Please contact president@ms-jd.org for more information.

When I read about Kamila Sidiqi, I felt she could also be a great motivational speaker, because of her experiences of running a successful business while being suppressed by the Taliban and her advocacy for women’s rights. Both her and Gayle are great role models for women who are trying to find a foothold in this male dominated world.