Strength in Numbers - To the Polls We Go 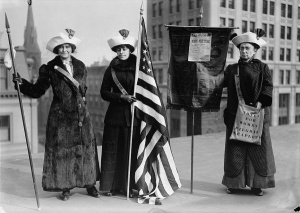 On November 8th, 2016, we will elect the 45th President of the United States. Who are we voting for? What issues do we care about? Keeping up with the debates and polls can be a daunting task. In conjunction with going to school/work, working out, spending time with family and friends, keeping up with the elections is an easy task to write off. However, we need to pay attention. Here’s why.

Voting is a hard-earned right. The suffragettes, worked tirelessly to give us the right to vote. From 1840-1920, women like Elizabeth Cady Stanton, Lucretia Mott, Sojourner Truth, Susan B. Anthony and so many others lobbied for our right to vote. On August 18, 1920, the 19th Amendment was finally ratified, proclaiming: “The right of citizens of the United States to vote shall not be denied or abridged by the United States or any State on account of sex.” Now that we have this right, we should make every effort to exercise it. In addition to exercising our right to vote, the truth is, elections affect us and we’re finally at the age where we can have an effect on the elections.

A new President generally means a new agenda. Even if we end up on opposite sides of the fence politically, candidates make decisions that affect us directly. Here are a few important issues they can impact:

Even if these issues are meaningless to you, it’s always helpful to have some background on current events for our own networking agendas. Although I’m not encouraging you to spearhead arguments with your colleagues, I am encouraging you stay on top of the election and learn how to effectively articulate your perspective.

So in an effort to help you stay up to date (but not bogged down), here are some tips:

Due to the rising number of millennials in our population today (83.1 Million, according to the U.S. Census), the truth is, we have the potential to shape our future through voting. Even if you ultimately decide against voting, keeping up with politics can only help us stay informed and grow.