By Chicana • May 29, 2007•Sexism, Sexual Harassment, and Other Forms of Discrimination 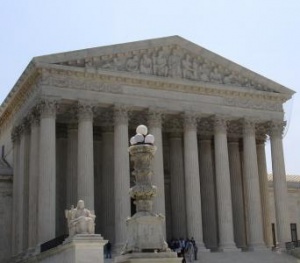 Another barrier has just been built as 5 men on the US Supreme Court (guess who?!) have ruled against a woman's pay discrimination claim. While I have not been able to read the opinion, the article clearly indicates that the majority author of the opinion, Alito, would like to find any way possible to deny relief to the woman, citing her failure to file a grievance after each and every paycheck. Ginsberg's heated dissent is right on point and fires back at the all male majority. I think people, including many women and this Supreme Court are far too quick to ignore discrimination against women or simply justify the inequities in the workplace. Frankly, it pisses me off!

In other words, don't wait to sue your firm for discrimination. I wonder how much room this leaves for attempts at mediation and other non-legal remedies. It seems like this decision discourages employees from less formal negotiations or back-and-forths with employers to try and solve workplace problems. Especially for female lawyers, it seems like suing your firm (or your corporation, if you're in-house counsel) burns so many bridges—not only looking backward, but forward into the future. Won't this sort of suit get you blackballed? Why does it make sense to tell female lawyers to put up (filing a lawsuit) or shut up (lose your right to equal pay) on a tightened timeline? We'd do better for the law to build incentives to stick it out a while, to try to make things better in your workplace.

Ironically this decision comes from an ideological wing of the Court that usually supports laissez-faire capitalism. Yet Ledbetter v. Goodyear tightens the timeline of dispute negotiations in a way that sharply curtails the free play of employment markets. This decision is not even defensible as economic conservatism—it is judicial activism that benefits big business at the expense of women. Including women lawyers.