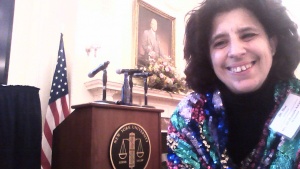 Author, Council of Europe handbook for Parliamentarians on the Ratification of the Convention Preventing Medicrime (English and French text coe.int)

Thank you for inviting me and I welcome my guests Hon. Obaid Noori of the United Nations in New York who was my classmate in Geneva, Jennifer Alden of the Japan Society in New York and my brother Fred who lives nearby.

I was born and raised on a self-contained island, different from its surrounding nation. I graduated high school and college on my little island, and later taught law for five years at Columbia University School of law on my island, Manhattan. Here we are in southern Manhattan at my father's law school. It is nice to be home! It was in this very room that my father told me he wanted me to be a lawyer. He had said that many times before but he said it again right here.

What a great moment to be surrounded by such sparkling women assembled here at NYU law!

There were only three women in my father's graduating class right here in NYU! He often quipped that he could always remember what they wore even if he forgot their names because they looked so different from his other classmates. My father never doubted that I would be a lawyer, he proudly admitted me to the Bar of the Supreme Court of the United States.

If you ever wish to be admitted to the Supreme Court of the United States feel free to ask me to sponsor you. When you  admit someone, the Court gives you a script to read saying "I move to admit" this person and you state their name. And if you deviate from that script the Court will take the matter under advisement. As lawyers you know what that means when the court takes a matter under advisement, it means you will not get an opinion that day. But the Court made one tiny exception in my admission when Justice Rehnquist noticed that my middle name was the same as the last name of the person admitting me, he gave permission for my father to say “I move the admission of my daughter to the Bar of the United States Supreme Court”

So it was a very very powerful torch that was passed to me.

Lawyers craft the rule of law as a harness to protect society and to produce useful work out of otherwise wild creatures.

My father viewed lawyers as mechanics, fixing malfunctions in the system to keep things going right.

His lessons provide the moral compass pointing towards my destiny.

When I was asked to justify my plan to study the law of nanotechnology in international relations, the Dean was skeptical about my topic because as he correctly stated, there was no law of nanotechnology at that time. I know, I said, but this multi billion dollar endeavor is the product of international scientific collaborations and its impact on global commerce and daily life will shift the existing balance of power ,bringing social change. If there is no law now, I said I will write it. Indeed I drafted text for the Council of Europe and commented on nanosafety standards for NIOSH and the World Health Organization as part of my doctorate. Hopefully, you will read my forthcoming book based on this work, FORECASTING NANO LAW: GLOBAL HEALTH IMPACTS. which explores regulation of nanomedicine, nanotechnology applications for food clothing architecture, aviation and nanotechnology as a weapon against medicrime..

In sum, recognition at MS JD org SUPERWOMEN JD 2016 is an important milestone along my career 's road- I have been traveling this road so much that I may have frequent flyer points! I have done some very cool things that would make my parents proud of me, but the one reason I am on the road less traveled has not yet been mentioned: I do all my work while also a full time MOM. I have raised two children, one a lawyer (it is genetic in our family) and one a staffer at Columbia University, just like my father the lawyer did. But few women are both a lawyer and a Mom. But if I were a man, no one would comment when I raised two children and followed my Father's profession and then passed it along to my own son.

I never intended to be a trailblazer! In fact I merely do things that would be common for many men. But alas,  as a lass there is no pipeline, no mentor to follow along this road. The next step is for someone to scoop me up and place me on the main road with high level paid responsibility for programs that need my unique Skill set, to Direct a program, a company or to as President in academia.

Please say this when someone asks about my work… dont say I dont know what she does, say dr ilise feitshans is an amazing jurisprude and mom who should be running your program.