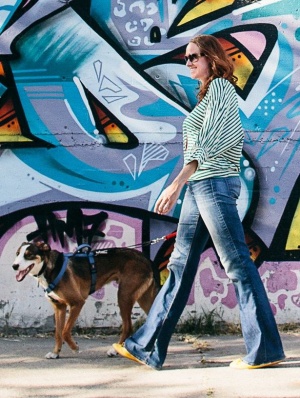 One of my goals when I started this column was to showcase attorneys who are practicing law in addition to pursuing some other passion. It is an accepted stereotype that attorneys are workaholics, and in truth, this is often the expectation in the profession. For many of the reasons I highlighted in February, however, I have learned that taking the time to pursue my other interests is a crucial part of my happiness, and I truly believe that it makes me a better lawyer as a result. In this regard, I wanted to meet other like-minded attorneys who had successfully built their lives in such a way that incorporated both their love of the law and their other pursuits.

So I was delighted to have an opportunity last month to meet with up Sara E. Coppin, an attorney and homesteader, in her hometown of Grass Valley, California. Sara is the founder and sole proprietor of the Law Office of Sara E. Coppin, where she practices immigration and criminal law. When she is not practicing law, however, she is raising goats and chickens, gardening, and practicing the art of other homesteading essentials, such as making cheese, jam, and homemade chicken stock. She has even dabbled in beekeeping. You can catch up on some of her homesteading trials and triumphs over the last couple years at domesteading.wordpress.com. Check out the baby goats; they are so adorable! And as the name of her blog implies, a fun fact about Sara is that she lives in a geodesic dome.

Rewind several years, however, and Sara was living in San Francisco and was building her career as an immigration attorney. To an outsider, it may have seemed like Sara was living the dream. The only problem was, it was someone else’s dream, particularly the big city life part and being someone else’s employee.

When she stopped to think about what she really wanted to do, she concluded that she wanted to move back to the country. “It was a very scary realization to have,” she said. And although it took her about a year to finally make the move, in 2011, she moved “back to the land” into her family’s home where she grew up to start homesteading and to start her own law practice.

Sara’s homestead is one of six on a large ranch that was originally purchased by her great grandparents in the 1920’s. Over time, the land was divided among friends and family, and in the 1970’s, her parents, described as “back to the land hippies,” built a geodesic dome on the property where Sara ultimately grew up. Like many young adults who grow up in small towns, Sara left to discover the world. She attended college in Santa Cruz and then spent some time in Ireland, New York, and eventually landed in San Francisco, where she attended law school. As she states on her blog, 18 years after moving away, she realized that she had had enough of “law firms and skyscrapers.”

In addition to the responsibilities of taking care of her homestead, which includes Henge and Hollow Farm, a shared goat raising and dairy operation with her neighbor Gina, Sara is now her own boss and her law practice is continuing to gain momentum. As the only immigration attorney in the county, many of Sara’s clients find her by word of mouth. She doesn’t even need to advertise.

When I asked her how she balances the two, being a lawyer and a homesteader, Sara admitted that there are constantly projects, which takes lots of planning and some creative problem solving. And she admits that, unlike her big city counterparts, she is not going to ever make a lot of money.  But she believes that the tradeoff is worthwhile. Sara self-assuredly sums up the choice she has made when she says, “this life is essential for who I am as a person.”

Toward the end of our time together, I asked Sara if she had any advice for other attorneys who may be inspired by her journey, and this is what she said, “if you are feeling unhappy, it is important to ask yourself what you really want” and then “craft your life that way.”

This is exactly what Sara did a few years ago and it is pretty obvious that she couldn’t be happier. And it didn’t require walking away from the law, it just required getting back to the land and practicing law on her own terms.

This is an inspiring post.  I love that Sara listened to her heart and found what she was looking for in her own backyard.  Reminds me of The Alchemist.  I really enjoyed reading it!

Thanks Kristin! I have not read the Alchemist. I will have to check that out. Thanks for the suggestion!