The Best Way to Leave the Law When You’re Burned Out? Don’t.

By Amy Impellizzeri • January 26, 2018•Ms. JD,  Writers in Residence,  Careers,  Other Career Issues,  Law School,  Choosing a Career and Landing a Job,  Other Law School Issues,  Issues, •Women and Law in the Media,  Other Issues 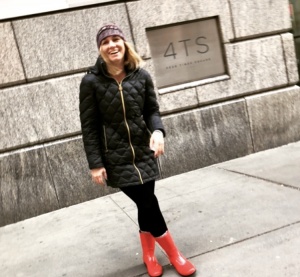 In 2009, I took a one year sabbatical from my 13+ year law career. I turned out the lights in my 42d floor office at 4 Times Square and left.

Nine years later, I often joke that I’m still on that one year sabbatical. The truth is, I’ve transitioned away from the active practice of law, and nine years has given me a fair perspective to understand how and why that transition has been so successful. In nine years, I’ve worked on the executive team of a pioneering start-up company, negotiated publishing contracts and a literary agency contract, launched a successful writing career, taught writing and other workshops across the country, and landed a newly created marketing/development position at a local private school.

But I never could have done any of these things if I had left the law when I was completely burned out.

My law career was a roller coaster ride of successes and low points. A sprawling graph of winning-appellate-court-argument-type-high points interspersed with gruesome-all-nighters-followed-by-name-deleted-from-the-brief-low points. I never wanted to do anything other than practice law, and after a decade or so, as I felt the burn out set in, I realized I had always loved being a lawyer. Until I didn’t. Nevertheless, I didn’t leave the law until I had reached a peak in my career. In fact, when the head of my department asked me not to leave on the eve of my sabbatical, I knew I was leaving at the exact. Right. Time.

My friend, Carol Cohen, of iRelaunch, advises not to ever leave a career at your low point. And the law is no different. You are frozen in time to your superiors and your peers when you leave your profession. Best to make that frozen memory a high point for purposes of networking and collaborations down the road. Similarly, you want your own self esteem to be frozen at a high point when you leave rather than frozen (make that paralyzed) at a low point.

Working hard to rebound from a downturn in your career fueled by burnout and exhaustion will give you the skills and confidence you need to succeed in your transition, and more than that, it buys you time.

And, what should you do with that time? Here are three suggestions.

Save money. It’s no secret that many lawyers stay in the profession – particularly in BigLaw – longer than their expiration period, simply for the cash. Best to tighten the belt while you’re still working, pay down debt, and even try out living on a smaller budget while you don’t have to. (E.g., downsize, re-think expensive dinners and vacations, cut back on wardrobe investments.)

Nurture your network. Many people think it’s most important to nurture their relationships with their superiors, but a transitioning attorney needs to think about and nurture relationships with the junior attorneys who will continue advancing after you leave. If relationships are cultivated organically, these junior associates will become your new network as you transition, and in many ways, they should be your focus as you work on your career and prepare for an exit on top.

Do it on the side. Think you can’t stay in a career you’ve lost interest in for another day? You can. And here’s how. Start cultivating hobbies and interests outside the law. Try out new Boards and volunteer for local organizations whose missions interest you. In this way, you can “try them on for size” as possible career transition opportunities, while fueling yourself for a second wind as you stay in your legal career until the right departure moment. Your naturally risk-averse nature (let’s face it! It’s a common character trait among lawyers!) can justify spreading your wings while you’re still gainfully employed. Rustic Cuff founder, Jill Donovan, tells a story of trying out different hobbies every year (Russian, poker, tap dance) while still practicing law, until she found one that became economically viable – jewelry design.

The bottom line is that you should resist the temptation to run out the door when you feel burned out. But that doesn’t mean it’s not the perfect time to start carefully plotting your exit strategy.

P.S. For more tips from some of my favorite successfully transitioning lawyers, check out my book, Lawyer Interrupted (ABA Publishing 2015).