The Bulldog Ballerina: 4 Tips for Success in an Alternative JD Career

By Seaira Christian-Daniels • May 17, 2017•Ms. JD,  Careers,  Firms and the Private Sector,  Other Career Issues,  Law School,  Issues,  Balancing Private and Professional Life,  Features, •Guest Bloggers and Profiles of Women in the Law,  Superwomen JDs and What You Can Learn From Them 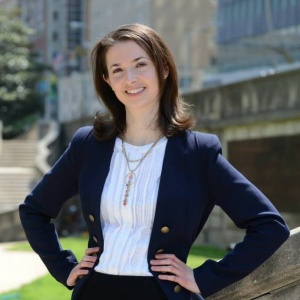 Avery Blank strategizes with individuals and organizations worldwide to help them attain their business, leadership, career, and policy goals. She has worked in the public sector at all levels of government including experience at the Executive Office of the President of the United States, the private sector at Johnson & Johnson, and non-profit consulting with the University of Maryland Center for Health & Homeland Security. Blank graduated as a Rose Zetzer Fellow with a J.D. from the University of Maryland School of Law and holds a B.A. in English and Spanish from Colgate University.

Avery Blank presented her first case in the seventh grade. She had gotten an answer she knew to be correct marked wrong. Instead of complaining, she went to the library that night, researched her response for proof of its veracity, and showed her teacher the evidence the next day. In the end, Blank and her other classmates who submitted the same response were given full credit. Small acts like this expressed a fundamental value of hers, fairness, and they led her in the direction of law school. “I’ve always spoken up for people who don’t, and that’s why I wanted to go to law school,” she says. “I knew that a JD would help me be a better advocate for myself and others.”

Blank realized while working in policy that she not only wanted to be an advocate, but she wanted to nurture the more enterprising aspects of her character. She decided to take a chance and start her own business. Blank is now an award-winning Principal and Owner of Avery Blank Consulting, and a regular online Contributor with Forbes. In her role, she combines her business savvy and entrepreneurial spirit to help under-the-radar brands, organizations, and people advocate for and strategically position themselves for opportunities that get them to the next level of success. Blank has been described as a bulldog ballerina, characteristics that show both her assertiveness and grace under pressure.

Blank was attracted to the University of Maryland School of Law because of its Women, Leadership, and Equality Program. The program, the only one of its kind in the country, represented the kind of environment her family displayed - a mother and father working in tandem to achieve their professional goals. Their teamwork girded her for the challenges she would face in her career and inspired her to champion the potential of women when they are given opportunities.

When asked how future JD’s and women seeking alternative careers can navigate the sometimes-murky waters to find their niche, she gives four pieces of advice:

1: Be a giver, but don’t be a doormat. Pursue your professional interests.

Blank says that going after what you want in life requires focus. This is particularly important for women, who she says have a tendency to focus too much on being a team player and contributing more to others’ success than their own. Blank herself has learned from Adam Grant, Professor at the University of Pennsylvania’s Wharton School of Business, that givers typically are most successful in life. However, Blank says women have to be careful about not becoming a doormat. “Don’t be afraid to go for your goals as you help propel others toward theirs,” she says.

2: Don’t let people tell you what a lawyer is supposed to be or do.

Blank went to law school to be an advocate. She says, “You don’t have to be in a courtroom to leverage your advocacy training and help others to advocate for themselves and achieve their goals, whether that is their leadership, business, career, or policy goals. My JD makes me excel at what I do. It’s what gives me an edge.”

Blank has helped women be innovative first-hand through her work as an advisor with the Women in Law Hack-a-thon sponsored by Bloomberg Law and hosted by Stanford University School of Law. Blank’s team won second place and commendation from industry-leaders at companies like Wal-Mart, Google, and Catalyst. She is a Tribeca Disruptor Innovation Foundation Fellow and Aspen Institute Ideas Festival Scholar and was awarded the Maryland Daily Record’s “20 in their Twenties” award. “You’ve got to identify the skills that make you great and let them manifest in a way that allows you to do what you’re both good at and love,” she says.

3: Take care of yourself.

Sleep, exercise, and boundaries. Blank says these three ingredients have helped her be her best self physically and stay prepared for the work ahead. “There will always be work, and the skill of a professional is to know when to put it down and go back to it later,” she says. Blank says she has never pulled an all-nighter and schedules time in the day when she is unavailable and can focus on herself.

4: Start. What you do not know can be an asset.

Blank has learned from books such as “The Self-Made Billionaire Effect: How Extreme Producers Create Massive Value” that the most successful risk takers see risk as missing out on an opportunity. “Don’t wait until things are perfect. Just start,” she says. Blank points to successful businesswoman Sara Blakely, who did not know much about the hosiery industry and industry practices before founding Spanx, as a testament to the fact that what you do not know can make you more innovative in your approach.