The Influencers: From Canoe to Air Force One 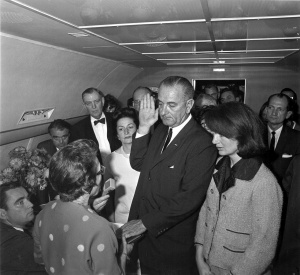 You may not know her name, but I bet you’ve seen her picture. She’s the one in the lower left in the photo here. She’s wearing the dress with the polka dots on it, and she’s carrying the bible. Her name is Sarah T. Hughes. The photo was taken on Air Force One as it sat the tarmac at Love Field in Dallas, on November 22, 1963, barely two hours after the death of President Kennedy, as the jet’s engines were being powered up to take the new president, Mrs. Kennedy and JFK’s body back to Washington.

To Sarah Hughes, law was not a second career or even a third career. Born in 1896, she graduated from Gaucher College in her hometown of Baltimore, moved to Winston-Salem, North Carolina, where she taught science for two years, and in 1919 moved again to the DC area to attend George Washington University Law School. Attend law school at night, that is. During the day she was a police officer working with marginalized women and children who lived and worked on the streets of Washington, D.C.

Fun Fact #1: Sarah was probably the only student who lived in a tent on the Potomac and traveled to law school in a canoe.

She met her husband at law school and moved with him to Dallas during a time when Texas women were prohibited from serving on juries, even though the Nineteenth Amendment had awarded them the right to vote. After practicing law for eight years, she was elected to the state House of Representatives where she her work was instrumental in the adoption of the 1954 state constitutional amendment that guaranteed women the right to serve on juries.

Fun Fact #2: Sarah Hughes did not start her auspicious legal career as a lawyer per se. Instead, a Dallas firm offered her space in return for her services as receptionist. Her legal career took off when the firm referred a few cases to her.

Fun Fact #3: At 34, she was the youngest woman to be elected to the House. Hughes served three terms in the Texas House of Representatives before being appointed the first woman state district court judge in Texas.

Fun Fact #4: Sarah Hughes was active in Democratic politics. She allowed her name to be placed in nomination for Vice President at the Democratic Convention in 1952 as a demonstration that women should take a more active role in politics.

Judge Hughes campaigned for Kennedy/Johnson in 1961, and shortly thereafter, President Kennedy indicated that he intended to appoint her to the federal bench. Robert Kennedy, the President’s brother and Attorney General, opposed her appointment because of her advanced age. She was 65 at the time, and the Administration was determined to establish a younger federal judiciary. Vice President Johnson, who had championed her appointment, was incensed that the President had chosen not to appoint her and hadn't consulted him about it. JFK relented, and Judge Hughes moved from state court to federal court.

On the day of the Kennedy assasination, Judge Hughes had attended the luncheon to which the President, the Vice President, and Governor Connally were headed when the assasination occured. She and a number of other local luminaries had planned to travel to Austin for an evening dinner that the President had planned to attend. Instead, after hearing the tragic news, she headed home. In the meantime, Robert Kennedy told LBJ that it would be best that he take the oath of office before leaving Dallas. Johnson asked that his good friend Judge Hughes be found. When she arrived home she learned that her office, friends, and LBJ himself were frantically looking for her. She set off for Love Field, which was a scant ten minutes from her house. It was less than two hours since Kennedy had been shot.

She described the experience (edited for clarity and brevity from the transcript of an oral history interview stored at the LBJ Presidential Library at the University of Texas in Austin):

I went on up the ramp. And somebody handed me a copy of the oath. I understand that someone had telephoned to the Attorney General and had gotten a copy of the oath. And then somebody handed me a book and said "This is a Catholic Bible." I walked on into the second compartment and there were a lot of people there; the Vice-President and Mrs. Johnson were there and neither--none of us said anything. I embraced both of them and then the Vice-President said, "Mrs. Kennedy wants to be here. We'll wait for her." She had come from the hospital and was in the rear of the airplane.

So we waited a few minutes and she did come out and he, Vice-President Johnson, told her to stand on his left and Mrs. Johnson on his right. And I leaned over to her and said "I loved your husband very much." Mr. Johnson turned to her and told her who I was; that I was a district judge who had been appointed by her husband. Then I repeated the oath of office and the Vice-President repeated it after me, he had his hand up--one hand up, and the other on this book.

The oath of office is in the Constitution, but it does not contain the words "So help me God!" Well, every oath of office that I had ever given ended up with "So help me God!" So it was just automatic that I said "So help me God!" He immediately leaned over and kissed his wife and Mrs. Kennedy, and I said something to him that the country was behind him and I knew that he would make a great President. He turned around and said to the pilot, “Let's be airborne."

Fun Fact #7: The “Catholic bible” used in the hastily arranged ceremony was actually a Catholic missal, a prayer book used at Mass, that someone found in the bedside table of President Kennedy’s bedroom aboard the plane.

Judge Hughes remained a close friend of President Johnson and his family, visiting him at the Ranch, and participating in both of his inaugurations, the launch of Lady Bird Johnson's White House memoirs, and the dedication of the Lyndon Baines Johnson Presidential Library and Museum.

Judge Hughes died at 88 after a stellar career - or careers. Although she was proud of her special moment in history, she would probably have said that she made her biggest contributions in her work in Democratic politics and on behalf of women and equal rights. She told TIME in 1965, “The sooner we get to consider women as individuals rather than as women, the better it will be. All women are not alike, just as all men are not alike."

Fun Fact #8: What is probably the most famous oath of office in modern history was not the only time Sarah Hughes was a participant in history and not just a witness to it. She was one member of the three-judge District Court panel that rendered the 1970 trial court decision in Roe v. Wade.

Fun Fact #9: Judge Hughes did not retire from the bench until 1982. Not bad for someone deemed “too old” when she was appointed to the federal bench in 1962 at the ripe old age of 65. May we all strive to be as productive in our “later” years.

Fun Fact #10: Her polka dot dress, which she had donated to a wax museum in Grand Prairie, Texas, was destroyed in a fire in 1988.