The Influencers: Nevertheless, She Persisted: The Story of Belva Lockwood 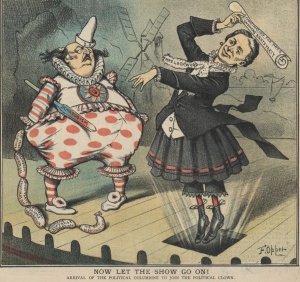 In 2020, to be admitted to the bar of the United States Supreme Court is not a difficult process. If you’ve been in good standing with your state bar association, you can ask two members of the Supreme Court bar to sponsor you. Then, you pay a $200 fee and take the oath. An extra special perq is to attend an oral argument session and have that oath administered by one of the justices, although that is not required.

But it was not always thus. If you were a woman in 1880, it would literally take an Act of Congress.

Belva Ann Lockwood was never one to let something as pedestrian as being born a woman stand in her way. When she was about ten years old, having read the bible through, she attempted to walk on the surface of a mill-pond near her home in upstate New York, as Saint Peter had done. Sinking into the sandy bottom, she attributed her failure in part to the fact that she was a woman, but not because she was in any way inferior to a man. To her, it was an arbitrary and parochial distinction. “Neither had I yet been taught that only men were supposed to be the anointed priests of God, and that holy unction had never yet descended on a woman’s head. I was classifying the whole human family under the generic term man, and unfortunately have been doing so ever since.”

Belva was born to a farming family in 1830. By the time she reached the advanced age of 14, she was teaching in the local elementary school. At 18, she married a farmer. Her domestic life was intersperced with self-study, and writing for literary gatherings and for publication. She lost her husband just a few years after their daughter was born. Belva, however, was not satisfied to stay down on the farm. Recognizing that she would need to further her education so that she could properly provide for her daughter, Belva convinced the administration of Genesee College (now Syracuse University) to enroll her, and she graduated in 1857 with honors.

Belva spent most of the following ten years as teacher and headmistress at several schools for girls. During this time she met Susan B. Anthony, and she was encouraged to examine the elements of the education that such institutions were providing to young women. As a result, she instituted changes to the curriculum to include courses typical of those young men took to prepare for employment in the business world.

At Genesee College she had taken private law classes from a professor and determined to move to Washington D.C. to pursue further educational opportunities. There she met and married her second husband, a progressive who supported his wife’s desire to further her education in law. After being rejected by Columbian School of Law, Georgetown, and Howard University, Belva was admitted to National University School of Law (now George Washington University). It was quite unusual for women of the time to seek a college education. She was one of the first to seek a law degree. And, by that time Belva was in her late 30s, married, and raising a child.

Despite successfully completing her coursework, National University refused to issue her a diploma because she wasn’t a man. Without a diploma, she was blocked from joining the D.C. bar. She had completed her coursework, passed all her classes, and felt rightfully that she deserved the recognition. Not one to let such a slight stop her, Belva appealed to President Ulysses S. Grant in his capacity as ex officio president of the university. It worked.

Belva, however, still had battles to fight. She hung out her shingle, but her application to join the Maryland Bar was rejected as was her application to practice in the US Claims Court and before the US Supreme Court, all because she was a female. In fact, judges before whom she practiced or intended to practice held her in disdain and ridiculed her for her desire to practice law.

Nevertheless, she persisted. Belva drafted legislation that would allow her and other women like her to gain access to practice in the federal courts, and after years of lobbying Congress, the measure was finally enacted. Belva was sworn in as a member of the bar of the U.S. Supreme Court in 1879, and in 1880 she was the first woman to argue a case before the Court.

Belva personally experienced the discrimination that many women faced during that era. She recognized as far back as her days as headmistress that she was paid half what her male counterparts were making. She worked hard for the passage of a bill that provided for equal wages in the federal government.

By 1884 Lockwood was ready to try a bold experiment. She ran for United States president on the ticket of the National Equal Rights Party to illustrate among other positions, the irony that a woman could run for office but could not vote for herself or anyone else. Not surprisingly, she lost, but she did garner at least 4,100 votes. This was a remarkable feat considering that those who voted for her were men. In 1988 she ran again, and was defeated again. Both campaigns were marked with curious parades staged by what one local newpaper sarcastically deemed her “devoted followers," young men dressed in women's clothes. But Belva proved her point.

Belva never walked on water and she never made it to the White House. Nevertheless, she persisted. She appeared before the Supreme Court at 76 and continued to practice law into her 80s. Throughout her life, she broke professional and political barriers. In addition to her career as a lawyer, she traveled extensively as a speaker, and worked tirelessly on behalf of women’s causes and to secure world peace.

The photo above is one of the many political cartoons of the day depicting Ms. Lockwood and other candidates running for the office of President of the United States.