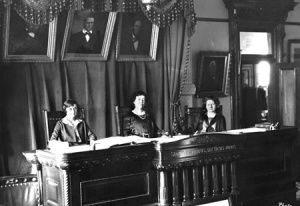 Being a Texan (non-native, but proud nevertheless), I love tales of interesting episodes in Texas history. There are many, but one of my favorites tells of what may be the most unusual state supreme court ever.

The events in our story occurred almost a hundred years ago. At that time, the Supreme Court of Texas consisted of a chief justice and two associate justices. You will be forgiven if you assume that in 1924 and 1925 all three sitting justices were male. This fact would come to pose a problem for the governor and the court.

At the time, fraternal organizations were extremely popular. One of the most popular in Texas was a group called the Woodmen of the World. The Woodmen attracted many elected politicians, judges, and lawyers, including all three supreme court justices.

In 1924, the Woodmen were locked in legal battle over title to two tracts of land. In the trial court, the Woodmen’s trustees had been awarded just one of the tracts. They appealed, and the intermediate appellate court reversed the trial court and awarded both tracts to the Woodmen. The case was appealed again. But this presented a dilemma. Since all three justices were Woodmen, they were conflicted out of hearing the case.

State law gave power to the governor to appoint special justices to replace ones that were disqualified from sitting because of a conflict. For ten months Governor Pat M. Neff searched diligently for replacements. However, every prominent attorney he approached turned him down because they, too, were members.

Governor Neff was not to be deterred, and finally he set upon a solution to this baffling set of circumstances. As a strong proponent of women’s rights, Neff had appointed many women to various boards and political positions. In fact, he felt that every appointed body should have at least one woman member. To overcome his dilemma, he would appoint justices out of a population that weren’t allowed to join the Woodmen: women.

Governor Neff appointed three prominent women attorneys. Unfortunately, he failed to consider that the state constitution required that supreme court justices have seven years of legal experience, which served to disqualify two of the appointees who were but two months short.

After some finagling, on the day before the Woodmen case was scheduled to be heard, the governor finally had three duly qualified women justices. In fact, it might have been difficult for Governor Neff to find three more people of either gender who would be more qualified to resolve this case.

Chief Justice Hortense Ward of Houston was the first woman to pass the Texas bar exam and the first woman to practice before the Supreme Court of Texas. Justice Ruth V. Brazzil of Galveston worked for years in the real estate and insurance industries, both of which would serve her well in the Woodmen dispute. Justice Hattie L. Heneberg of Dallas practiced law in Texas for fifty years. She served as an assistant attorney general of Texas, a special assistant US Attorney, and an assistant district attorney of Dallas County. She was active in many civic and political organizations and founded the Legal Aid Bureau of the Dallas Bar Association.

The all-female Texas Supreme Court sat for five months. It finally ruled in favor of the Woodmen of the World.*

There were no women on the “regular” Supreme Court until 1982 (one year after the Hon. Sandra Day O’Connor was appointed to the US Supreme Court) when Ruby Kless Sondock was appointed to fill out the term of a member who had passed away. She did not seek election when her appointed term ended. In 1992, Rose Spector became the first woman elected to the court in her own right.

The Woodmen*** remained all male until 1965 when it merged with its women's affiliate organization, which was formed shortly after the Woodmen was founded in 1890.

*During that time, the regular Supreme Court continued its business as usual.

**Oklahoma is the other.