The Influencers: This One Opened Her Own Doors 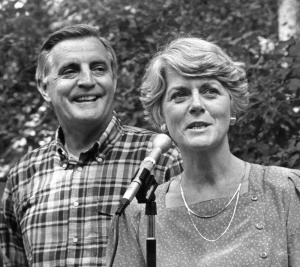 A little quiz on the eve of the 2020 Presidential election:

In case you haven’t guessed, it’s all the same person. She ran in the 1984 race, so if you’re a Baby Boomer, this one is probably not a mystery. If you were born after that, all bets are off. With all the press afforded Kamala Harris, Joe Biden’s running mate, and Hillary Clinton, who headed the Democratic ticket in 2016, not much has been said this election season about the first woman on a major party ticket, or that it took 24 years before another woman - Sarah Palin - reached such lofty political heights. Since the ranks of us Boomers are thinning out, I’m here to educate all you whippersnappers.

Her name was Geraldine Ferraro. She and her running mate, Democrat Walter Mondale (pictured above with Ms. Ferraro), ran against incumbent Republican President Ronald Reagan and his Vice-President, George H.W. Bush.

I’ve written in this column about other women who’ve had to scale sheer cliffs to gain a foothold in the legal profession. You might think that by 1984, saying “You’ve come a long way, baby” might actually have meant something, but even in mid-20th Century America, women were still fighting battles to get into and succeed in law school. No less, Gerry Ferraro.

After college she became a teacher because, “that’s just what women did.” But she soon decided that she wanted something different. Despite being admonished by an admissions officer that she was "taking a man's place, you know,” she attended Fordham University School of Law at night and taught in a New York City elementary school by day. The daughter of Italian immigrants, she pursued her law degree with financial help from her mother, a widowed seamstress. Ferraro was one of only two women in her class.

Shortly after graduation, she married John Zaccaro and spent 13 years working as a lawyer in his real estate firm before she joined the Queens County District Attorney’s office in 1974. A year later she was assigned to the new Special Victims Bureau and became its head in 1977. (Can you imagine her bantering with Mariska Hargatay’s Olivia Benson on Law & Order: SVU?)

Putting rapists and child abusers behind bars was not enough for Ferraro. She wanted to do more to attack the root causes of the crimes she was prosecuting. As she was beginning to make a name for herself in Democratic circles, her political mentor, future governor Mario Cuomo suggested she enter the race for the U.S. House of Representatives. In an unlikely come-from-behind campaign against two much more well known opponents, she won outright in the primary and went on to win the general election.

Ferraro spent three terms in the House of Representatives, gaining recognition and power in the House and in national Democratic Party roles, including Deputy Chair of the Carter-Mondale campaign in 1980 and Chairman of the Platform Committee in 1984 before she found herself on Walter Mondale’s short list of 1984 Vice Presidential hopefuls.

The Mondale-Ferraro ticket did not take the presidency that year, but everyone knew that in 1984 America was turning a corner in national politics. When Geraldine Ferraro formally accepted the nomination as the Vice Presidential candidate, she brought many in the audience to tears when she, a woman and first generation child of Italian immigrants, said “American history is about doors being opened, doors of opportunity for everyone, no matter who you are as long as you’re willing to earn it.”

Ms. Ferraro, you did indeed open the door for women. And now, 36 years later, someone is finally about to walk through it.