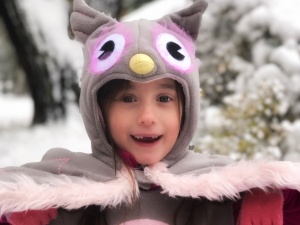 As I write this blog post, I’ve just wrapped up my daughter’s fifth Halloween dressed as an owl – and she’s only seven years old. So basically, she has chosen to dress like an owl every year that she’s been capable of making her own costume decision. She’s not particularly obsessed with owls the other 364 days of the year, and it continues to surprise me that she sticks to her tried and true costume choice while her peers now delve into popular movie characters or seize the opportunity to don glittery makeup and colored hair. Yet my daughter, thus far, has resolutely committed to the idea that every October 31, she’s a cute, fuzzy, pink and gray owl who flies down the sidewalks and hoots more than she speaks human language.

Each year, it becomes more and more amusing to me that my daughter dresses as an owl, again. But as I was racking my brain this evening for a novel raptor-related play on words to use when captioning the obligatory Facebook Halloween picture (there are only so many puns I can invent around the owl theme!), I thought a little more deeply about my daughter’s rationale for refusing to veer from her tried and true costume. And what I realized is that there’s some real wisdom that can be gleaned from my little owl: sometimes, complacency is actually a positive mindset to practice.

Complacency wouldn’t typically be labeled a beneficial characteristic. But for hard-driving Type A’s, I think complacency is one of those traits (like imperfection) that might be healthy and productive to practice in appropriate doses. We have it so ingrained in us to constantly be striving higher and seeking the next best thing. That innate motivation is never going to disappear, but what if we could pause every once in a while and give our whirling, goal-oriented minds a break and just revel in the status quo? Doing this might allow us to live more in the present and calm the inner voices saying we’re not quite good enough.

And to take it even a step further, complacency could even be a way to achieve our goals more fluidly and efficiently. I try not to brag about my children too often, but my daughter really is a fabulous owl. She’s mastered a “Whooo! Whooo!” that could easily be mistaken for an actual bird. The costume (which I’ve had to purchase in 2 different sizes) is easy to throw on, and everyone can tell what she’s dressed as – no explanations required. In short, every Halloween she can remember has been spent as an owl, and each one has been fun and fruitful. So it shouldn’t really be surprising that she returns to the owl costume every October – except that it’s difficult for me to comprehend when my own mental state is generally spinning my wheels on overdrive trying to figure out what to do next, how to improve, or how I could change things up to achieve just a little (or a lot) more.

How often have you veered away from something that was working for you in your career merely because you thought there must be something better out there, some more worthy or more trendy way to do things? And how many times have you caved to external pressures and your people-pleasing tendencies and changed things up or gone after a goal that wasn’t necessarily authentic to you? I’m not advocating that we should resist innovation and aim for stagnancy, but there are times when following the adage “If it ain’t broke, don’t fix it” might lead to less stress, more gratitude, and even increased productivity and career wins by working consistently rather than constantly switching things up.

So the lesson I’m taking from this Halloween is to pause when I notice I’m operating from a framework of competing to be the best, following the latest trends, or worrying more about what others think than my happiness. There are a definite time and place for aiming high and evolving in your career, but there may also be places where you’ve found what works for you and the most productive thing you can do is go with the flow, stick with your convictions, and enjoy a sweet spot you’ve landed upon.