The Woman of Color’s Burden: Reflections on the 2016 Ms. JD Conference

By Alexandra Sabater • March 03, 2016•Ms. JD,  Conference,  Issues,  Sexism, Sexual Harassment, and Other Forms of Discrimination,  Features,  Superwomen JDs and What You Can Learn From Them 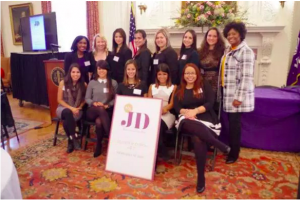 Her voice breaking and head held high, Noorain Khan, a Muslim woman and lawyer, shared the “microagressions” she faces every day and the underlying worries that persist in the back of her mind. Would they have hired me if I still wore a hijab? How do I find the time to pray during the workday?

Khan, one of the participants in the first panel, aptly titled “With our Powers Combined: Intersectionality and the Law,” of the annual Ms. JD Conference, called on the two hundred and thirty-five attendees gathered at the NYU School of Law to prevent these wrongs. Her shoulders then drooped, and with a tone that conveyed more exhaustion than exasperation, she explained that all too often women of color were left alone with the burden of educating others, of carrying out the emotional labor, of coping, of transforming institutions so that they work for them as well.

This, I find, is the Woman of Color’s burden. A far cry from the imperialist White Man’s burden, this burden consists of reeducating, of creating safe spaces, of making it so that being a W.A.S.P. is simply an adjective, not a standard, of reaching the basic, necessary and yet elusive concept of equality. It is a burden that grows exponentially when factors such as gender, sexual orientation, race and religion intersect. The way these overlapping of characteristics affect how a person self-identifies, and the oppression they face, is known as intersectionality.

Michele Coleman Mayes, the Vice President of the New York Public Library, matter-of-factly proclaimed that law, as a profession that seeks to uphold justice, fairness and equity, does not have the “luxury” to forego introspection and disregard a discussion of intersectionality. Coleman spoke of how not only is it impossible for her to separate the black and female portions of her identity, but that doing so would simply be a disappointment. This being true despite her affirmation that women of color are repositories for every stereotype, constantly underestimated and routinely questioned. For these reasons, minorities oftentimes feel the subconscious need to hide parts of who they are to assimilate, also known as “covering.” Even a person as accomplished as Coleman shared that while being a partner at a law firm, she questioned whether or not she should change the African Art that adorned her office after co-workers commented on it.

Ms. JD did a great service by bringing the topic of intersectionality front and center, instead of relaying it to one of its breakoff sections tailored to women of color. Far too often only those affected by oppression, seeking solace and tools to manage it, come forward to discuss identity politics. While these spaces are definitely needed, the woman of color’s burden will only be alleviated when everyone participates and is educated. Various attendees from states such as Montana and Kentucky frankly shared that they could count on one hand the people of color in their law schools and that these types of discussions simply never take place.

Everyone in the conference room gasped as Julie Alarcón, another panelist and student at UC Hastings School of Law, shared her anecdote of a classmate confusing her for another Latin law student because “they all look the same.” Although widespread disbelief is the appropriate response to such an account, it simply isn’t enough. Education beyond the sharing of horror stories is fundamental to eliminate the less obvious microagressions, let alone achieve progress, because as Khan shared, oftentimes people at the top don’t know how to make change.

So what is changing and what can be done? Coleman confirmed that the ABA’s Commission of Women is working on an amendment to the Model Rules of Professional Conduct to prohibit bias outright, beyond harassment and discrimination. Alarcón emphasized that women of color have to learn how to sell their characteristics as an asset. For instance, bilingual women should emphasize that when discussing their compensation. Finally, Khan encouraged everyone, even those who aren’t people of color, to learn how to be an ally, to listen, to help when asked and most importantly, to simply live with compassion and think about how they judge others. Some may argue that this seems trite, but this is no small feat. The only way to reduce the Woman of Color’s burden is through widespread education that focuses on comprehending and valuing the unique struggles and strengths related to possessing intersecting characteristics.

*Alexandra Sabater Baerga is currently a third-year law student at the University of Puerto Rico School of Law. During her time in law school she has worked as a teacher’s assistant for Professor Efrén Rivera Ramos, as a two-time Summer Associate at the firm McConnell Valdés LLC and as a judicial intern for the First Circuit Judge Juan R. Torruella. Her interests consist primarily of Constitutional and Labor Law. In her free time she enjoys anything related to art, music and poetry.

Alexandra: Thank you SO MUCH for doing such a great job of cataloging this session at the conference and for offering your feedback that it was worthwhile.  I hope you will join Ms. JD as we continue to pursue new and creative ways for supporting women of color through our programs!