By Anonymous • May 03, 2021•Issues,  Sexism, Sexual Harassment, and Other Forms of Discrimination

The world has become a frightening place. The evil that resides in some humans is unrivaled. At any moment, someone could be taken from a mall or grocery store parking lot. Someone could be convinced of a new job opportunity that ends in being trapped. The statistics of human trafficking continue to grow year after year. It is a widespread epidemic that is constant and extremely complex. There are facts and statistics, but none are precisely because it’s an immeasurable concern. What little we do know, is that every situation differs. Similar to slavery, the entrapment of hundreds of thousands of people is occurring on a yearly basis. The Polaris Project says that the business of human trafficking is worth more than $150 billion. It is a growing issue that nobody seems to have a concrete solution to.

Those who commit human trafficking violations are from all corners of the world. They look like nothing more than an unsuspecting gas station customer. It is one of the hardest criminal activities to spot, but something is being done about it. Truck drivers are beginning to take a stand. Truckers traverse the United States, and many other countries, more than any other group of people. Traveling thousands of miles a week, truck drivers have seen it all. They know the ins and outs of the interstate systems, the activities of remote areas, and the hustle of inner cities. Truckers are, undoubtedly, a great solution to combatting the human trafficking issue. Organizations like Truckers Against Trafficking are combatting the issue by taking certified courses on human trafficking and teaching it to truck drivers. 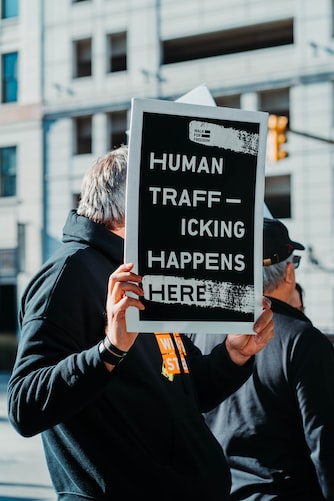 Human trafficking is defined as, the action or practice of illegally transporting people from one country or area to another, typically for the purposes of forced labor or sexual exploitation. Every year, thousands of men, women, and children are trafficked throughout the world. The most troubling dilemma about human trafficking is its lack of consistency. Most crimes develop patterns, operate in the same areas, or utilize the same tactics; human trafficking is almost never the same. It can occur in suburban neighborhoods and tough inner cities alike. It can happen in Hong Kong, and it can happen in Houston. Traffickers have no boundaries and they have no tendencies.

Often, human traffickers use force, identity fraud, authority, or pressure to trap victims into a life of “slavery”.

There are many myths that surround human trafficking that make some people feel like it won’t ever happen to them. When you are unaware of the signs, that’s when it will happen directly in front of your face. Common myths of trafficking include:

These myths fly under the radar of the general public or are seriously misunderstood. Human trafficking is not always violent or sexual; it can be as simple as manipulating a person’s life. Remember, traffickers do not have tendencies. Male or female, young or old, anyone can be a victim of human trafficking. More often than not, victims are lured in under false promises. They are not always physically bound in some way but instead bound mentally to the situation. Traffickers can lie about well-paying jobs, romantic relationships, or anything a person may want badly.

The main goal of a human trafficker is to aim at “helping” the needs of the person that is their target. They may follow them on social media or learn about where their job is to get first-hand knowledge. Then, they will offer something better and people will usually take it. In 2018, there were 10,949 human trafficking cases. That number doesn’t include the thousands of cases that went unreported. There were more than 5,859 potential traffickers identified. They are in every city of every country; know the facts and be prepared to spot them.

If you’ve seen something or been involved with trafficking yourself, the National Human Trafficking Hotline is available 24/7. Call 1(888) 373-7888 to get the help you need. If you’ve been involved in a truck crash, the damage could have been severe. Loss of wages, medical bills, and stress can add up quickly so make sure to get help from reliable truck accident lawyers. 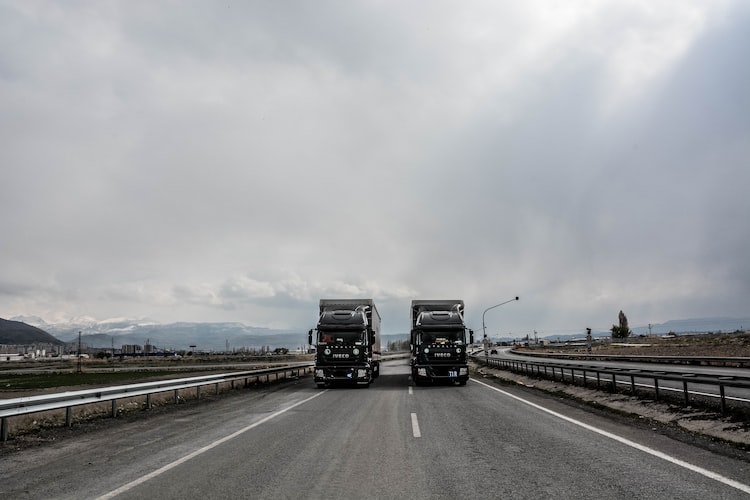 The crime is everywhere, but the main routes that human traffickers use are the interstates within the United States. They are convenient ways to get long distances quickly. Truckers travel these same routes and are now being trained to spot human trafficking behaviors.

There is no one way that victims will act, but you know the red flags: a boy who never leaves the sight of a controlling man, a teenage girl who seems strung out on drugs, or a distressing face seen walking through a rest area. All of these could be victims of human trafficking. That’s where truckers come in.

Companies, drivers, and personnel all operate in the main areas that human traffickers do. This makes them the eyes and ears of human trafficking help. Truckers spend most of their time in gas stations, fast food parking lots, rest areas and interstate roads. They are constantly on the highways, at all hours of the day. These facts make truckers the best candidates to spot potential human trafficking situations. More than 845,000 truckers are now registered as TAT (Truckers Against Trafficking) trained. According to TAT statistics, truckers helped bring attention to 665 cases in 2018. With those phone calls, they are said to have helped over 1,230 victims within a year. The mission of TAT is to “educate, equip, empower, and mobilize members of the trucking and busing industry to combat the trafficking problems in the United States.” They hope to partner with law enforcement to develop a detailed training program that could save thousands of lives. Human trafficking, or modern-day enslavement, is far from seeing an end. However, with the help of truckers, there has already been an impact made.

Truckers are essential in fighting human trafficking, but they are also critical to the growth of the planet. They deliver goods all over the world, stock our grocery store shelves, and get medicine to those in need. Yet, truckers are going underappreciated. They work long hours, spend much of their time alone, develop unhealthy habits, the pay is low, and the deadlines are tight. All of these stressful factors add to a growing mental health problem amongst the trucking community. Truckers are turning to drugs and alcohol to cope, but they are eventually developing mental issues from the occupation. We need to appreciate truckers and give them the positive encouragement they deserve. Including combatting the human trafficking epidemic, truck drivers do a lot for this world. Next time you see a trucker, give them respect and say thank you.