Two Birds, One Stone: Helping Veterans By Attracting More Of Them To The Legal Field 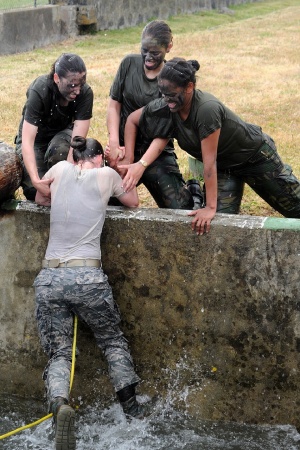 We advocate for women from all walks of life to attend law school and become lawyers, because we understand that it’s not only our female presence that rounds out the profession as a whole, but our diversity of backgrounds that contributes to its success and growth in our nation. But there are still a few groups that remain disproportionately represented among JDs, and one of them is veterans. So, why aren’t veterans pursuing legal careers?

There are a lot of theories out there, some of which make more sense than others. First off, veterans don’t always come back in the same shape they left. According to the University of Nevada, Reno, many of today’s veterans only have a high school diploma, and are restricted in their job searches based on that fact, and the fact that their military training is often very specific and hard to apply to a variety of, if any, civilian careers. Additionally, there are 19.3 million veterans, 3.8 of which have a service-connected disability.

These disabilities take a wide variety of shapes and forms. Some physical, some mental, others both. Regis College found that the most recent crop of veterans (post 9/11) suffer from PTSD (post traumatic stress disorder), depression, and substance abuse issues the most. Physical disabilities certainly make pursuing certain types of job training and careers difficult, but a legal education and career is negatively impacted the most by mental illnesses and disabilities. This is especially true when mental and emotional illnesses go untreated.

One of the biggest issues facing veterans right now is a lack of access to proper care. This isn’t anything new, but in case you need convincing: nearly 2 million American veterans don’t even have health insurance, and a 2015 report exposed the disturbing fact that out of 800,000 applications that were stalled awaiting approval for healthcare enrollment, 307,000 applicants died before their applications could be processed.

Those numbers are more than just disconcerting: they are all-out frightening.On top of that, The Department of Veterans Affairs recently found that an average of 20 veterans a day committed suicide. This is an absolutely staggering number, and goes to prove that our country needs to take some huge steps to fix this issue.

The answer to this problem isn’t going to be cut-and-dry, but I hope that at this point, you’re thinking what I’m thinking: it sounds like veterans need some legal representation. Better legal support to fight for the benefits they deserve, and more aggressive lobbying to pressure lawmakers into changing policies that leave our service men and women behind in the dust.

A 2016 article in The Washington Post discussed this issue in depth, exposing some of the issues that lead to the disproportionate number of homeless veterans. They found that half (five out of the top ten) of the issues that force veterans to sleep on the streets require legal help to be resolved, and the majority of veterans in these situations simply could not afford it. The article also discusses some of the positive steps being taken in this regard, highlighting the growing presence of VA based legal-health partnerships, as well as local efforts to foster relationships between legal aid and community health and housing initiatives.

Connecting these issues with a legal presence that can advocate for them at the highest level is a necessary step, and who better to represent veterans in need than veterans themselves? This issue comes full-circle, as I personally believe that drawing a larger number of service members to law school will result in a larger number of legal professionals who have a vested interest in resolving these problems, as well as a more personal and thorough perspective on the past experiences and current issues our veterans face.

So what can we, female JDs (and prospective JDs) do to help? Well, first, we can consider a career shift to public advocation ourselves. Look into The Veterans Legal Corps (this is an especially lucrative opportunity for current law students) or see if there are any local initiatives taking place in your community. If not, see if you can round up enough support to start one yourself! Let’s get the word out and provide as much education and bridges to access as possible.

Second, let’s see what we can do to draw our veterans into college, and ultimately, law school. I searched online and there doesn’t appear to be much happening on municipal, regional, state, or even national levels in regards to educating veterans about, and attracting them to a career in law. This is despite the fact that military service and the travel opportunities that come with it are an excellent prerequisite to a job in this field, even if it’s not going for the full-on JD. Why don’t we take it into our own hands to change this? There’s plenty that can be done in our own home towns and communities, and maybe some of us can take it upon ourselves to make this a pressing issue at next year’s annual Ms. JD conference?

The more veterans we attract to law, the more advocation they will have from the entire legal community in general. I am hopeful that this will snowball into more veterans having access to treatment, training, and educational programs that can help them all, disabilities or not, transition from the military into a legal career.

Third, let’s distribute as much information as we can about military programs that pay for college tuition, including both the Montgomery and Post-9/11 GI Bills, and the various GI Bill kicker programs that are available to our veterans, as well as the Military Tuition Assistance Program that is available to current servicemembers. In addition, every state has universities (including law schools) that participate in the Yellow Ribbon Program, which is a contribution from the school itself to match all or some of the GI Bill’s funding for veterans pursuing an education at their institution. You can find more information about each school’s participation levels here. Lastly, there’s a wide variety of scholarships available specifically to veterans.

I would love for this to turn into more than a mere article covering a topic that is dear to my heart. Let’s start a conversation today to move toward a better future for all of our veterans. Whether it’s in the comments here, over drinks with your fellow JDs, or at your next big meeting, conference, or summit, please speak up about ways that we can advocate for our veterans while also attracting them into powerful roles where they can better serve their peers.