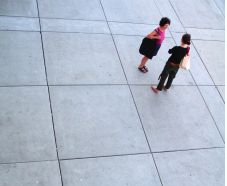 The first week of my law school career, I went to my school's 'Clubs Night' and signed up to be involved with the Women's Law Association.  Thus began my involvement with women's affinity groups , and this involvement has not stopped since.

I now work at a large New York law firm as a corporate lawyer.  I have been a member of the women's affinity group at my firm since being a summer associate and I recently took on a role in the group's leadership.  Our group is very active, hosting different networking, speaker and professional development events.  My first meeting was wonderful, full of enthusiastic female attorneys with fantastic ideas about how to support the women at my firm.  I, myself, volunteered to organize a new mentorship program.  After a brief discussion, I agreed to send out an email to the female attorneys at the firm to advertise our new initiative.  And then it happened:

"Make sure not to put the name of our group in the email title.  Otherwise everyone will just delete the email," said one  of the more senior members of the group's leadership.

I was shocked.  As someone who usually eagerly opened emails from the group, it had never occurred to me that people might actually delete the emails we sent because they saw our group's name in the title.  I asked for more details about this problem and heard story after story about how women generally did not feel like a women's affinity group was relevant to them anymore.

I left the meeting thinking about this problem and talked to some of my female colleagues over the course of the subsequent week.  Some felt that the events that women's affinity groups organized, at law schools, at work and with bar associations, were always the same.  Others, in the midst of their busy lives, just were not interested in dedicating any of their time to participate in their women's affinity group.  Most shocking of all was the number of women who were simply tired of receiving messages from their women's affinity groups.  They were successful in the world of Big Law and frankly just did not want to read one more story about the glass ceiling.

Thus began my women's affinity group (and my personal) mission - to find a way to make the group relevant and interesting again to a wide range of women.  First step - develop a new kind of mentoring, which I plan to write about on Ms. JD next month.  Comments and ideas from Ms. JD readers are also welcome!